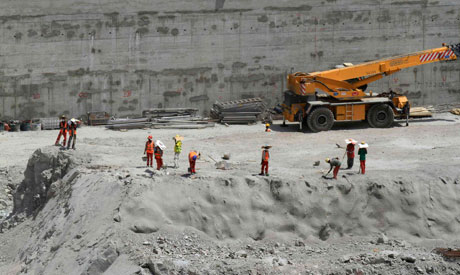 Fresh talks between Egypt, Sudan, and Ethiopia will begin on Sunday in Khartoum to discuss the technical offer from French firms BRL and Artelia on impact studies of Ethiopia’s controversial Grand Renaissance Dam (GERD).
During the three-day talks, the countries will also discuss the offers with the two firms’ representatives, state news agency MENA reported.

In late January, Egypt announced that it had received the firms’ offers, and that it was reviewing them ahead of the tripartite meeting.

Although Egypt has repeatedly expressed concern over the dam’s possible effect on the country, Ethiopia insists it will not negatively affect Egypt’s share of Nile water.

In December 2015, President El-Sisi addressed the public saying that there is no reason to worry about the dam and that the matter would be resolved.

“I totally understand the concern of Egyptians as water is a matter of life or death,” El-Sisi added.

The dam, scheduled to be completed in 2017, will be Africa’s largest hydroelectric power plant with a storage capacity of 74 billion cubic meters of water. Geeska Afrika and Al-Ahram Reports.