Home frontpage Sudan: The New Gold Rush: On the Artisanal Miners Who Risk Their... 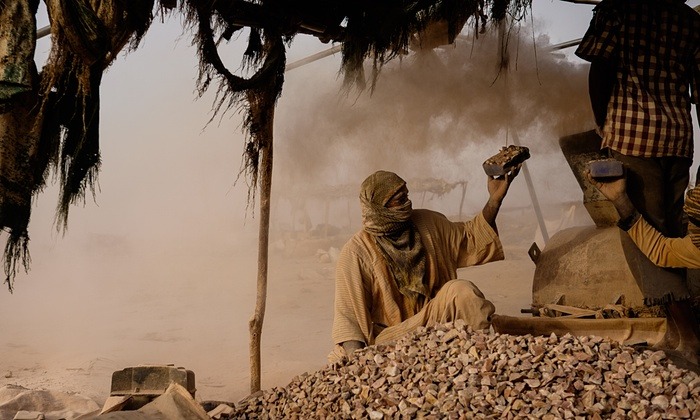 KHARTOUM (HAN) December 27, 2015 – Public Diplomacy and Regional Stability Initiatives News. By: Peter Schwartzstein and Leyland Cecco. It’s a little before 7am on a bright, airless morning and already Abdullah Idriss Isaac has been hard at work for hours. Swishing his aluminium pan back and forth through a waist-deep pool of brackish water, he wearily scrutinises its contents for glimmers of gold. With the sun beginning to beat down, the young miner splashes handfuls of the liquid – laced with mercury and cyanide to separate gold from unwanted rock – on his face to stay alert.

Around him is a scene like something out of Mad Max. Overseers set truck tyres alight to soften ground that’s been baked solid by the fierce Sahara sun. As the flames relent, newly arrived workers step in to to blast away chunks of the weakened turf with homemade explosives. A series of muffled bangs ring out across the desert encampment. “Watch out!” the miners shout at one another.

Amid the chaos and the pall of rank chemical fumes, Isaac sticks to his duties as a gold “cleaner”. Since fleeing his home city of Nyala in western Sudan’s war-torn Darfur region, he’s scrimped tirelessly to try to repay the cost of his tools and turn a profit. Now, this sparsely populated hinterland to the south of the Egyptian border is beginning to show promise. He says the terrible conditions will not dash his dreams of striking it rich. “There’s no work elsewhere, so what choice do I have anyway?” he says. “It’s this or nothing.”

Prospectors
The government in Khartoum faces a similar dilemma. After growing at roughly 8% a year during the 2000s, Sudan’s economy now lies in tatters after South Sudan’s secession in 2011 deprived it of 75% of the income from oil reserves. There are conflicts in seven of its 18 states. With an El Niño this winter sure to bring further drought, authorities have realised the urgency of reviving the economy and are trying to boost an industry that had been in the shadows for decades.

About 200 local firms have taken advantage of new legislation that has opened up swaths of the country to prospectors, establishing operations across eight states, according to Sudan’s ministry of minerals. Looking to woo international investors and mining giants, recent government press releases touted Sudan’s ambition to become the third-largest gold producer on the continent – behind South Africa and Ghana.

The country produced four tonnes of gold in 2009, 36 in 2014, and was expected to reach 74 tonnes this year, according to official figures. By comparison, Ghana produced 107.9 tonnes in 2013, a figure thought to be much higher now. So far, however, only a few foreign businesses have risked setting up mining efforts in Sudan. US sanctions, imposed during the 1990s when Khartoum harboured Osama bin Laden have made it difficult for interested firms to secure the enormous sums necessary to launch large-scale mine constructions.

“Lots of European banks are under pressure to have nothing to do with Sudan,” says Hugh Stuart, CEO of Orca Gold, a Canadian company that is one of the few to have taken the plunge. “It does take us a while to work out how best to transfer money there.” Orca is currently looking to the Arabian Gulf for the $200-300m required to bore a proper mine on its land to the north of Abu Hamed.

Analysts also suggest some foreign firms might be wary of extensive dealings with the Sudanese government, which insists that all gold be sold through its central bank, and whose president, Omar al-Bashir, is wanted for war crimes by the international criminal court. The biggest obstacle to foreign investment, though, appears to be foreign firms’ desire to distance themselves from local mining companies and their chaotic practices.

Danger
So lax is the enforcement of environmental regulations that many small companies dump their mining waste – including the mercury and cyanide remnants – along the Nile. Come the August flood, the waters rise and wash riverside debris towards the Mediterranean. “We fear it will seep into the water table. We fear for the river,” says Salah Abdel Rahman, a conservationist and Nubian rights activist in Abri, in the midst of the gold fields.

Abdel Rahman and his peers also say that the possibility of quick riches is luring young local men from the fields, thereby draining local agricultural labour, and changing the character of the villages. In the absence of any real health and safety laws, and with no medical assistance for miles around, many of these workers are saddled with a range of ailments. Local activists say cancer rates have skyrocketed as a result of mercury smoke and accidental cyanide ingestion. “We are all careful,” Isaac said, immersing himself once more in a chemical-ridden gold pool for the remainder of his 12-14 hour shift.

For the time being, the government’s hopes of economic revival rest upon small Sudanese mining companies, although most suffer from a lack of expertise. “Nothing is being done systematically and so a lot of ore is being wasted,” says mining geologist Ayman Ibrahim, who works in the vast arid expanse to the north of Dongola.

Local infrastructure is still lacking and most artisanal miners, like Isaac, are so beholden to traditional techniques that it can be hard to integrate them into a more mechanised setup. But to many of the young eager professionals who’ve flocked to the north straight out of mining college, those in charge seem woefully ill-equipped to maximise the industry’s potential. Only now, Ibrahim says, are most universities teaching the correct geology that will enable greater numbers to pick up on the reddish rock patterns which signal the proximity of gold. Source: theguardian

Read more at: Sudan’s new gold rush: on the artisanal miners who risk their lives