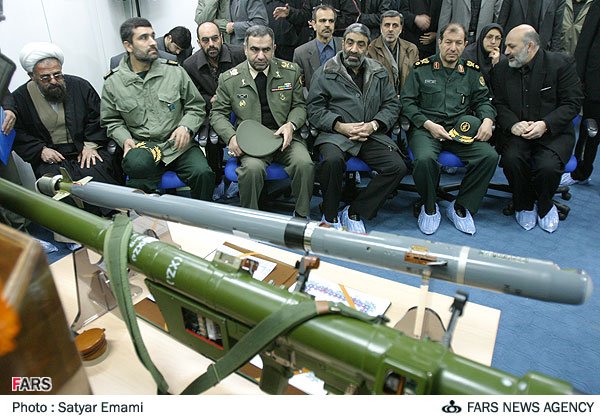 It’s also Chinese. Specifically, it’s a Chinese QW-2 Vanguard, according to consultant firm Armament Research Services, which identified the weapon from its design and markings.

The shoulder-fired QW-2 is a fairly advanced and modern weapon. It launches infrared-homing missiles that can shoot down everything from transport helicopters to jet fighters traveling at altitudes higher than 13,000 feet.

And there’s one overriding reason why China is supplying South Sudan with the missile — to ward off occasional air strikes by Sudan.

South Sudan is also highly dependent on oil  —  with most facilities located in the war-torn northern regions of the country. China heavily invests in South Sudan’s oil infrastructure, and wants to protect it.

The wells are vulnerable to Sudanese warplanes. In 2012, Sudan carried out an air campaign against Juba’s oil facilities. While air attacks are now less common, Khartoum still launches the occasional cross-border strike.

But Kiir’s real edge comes from Uganda — his ally. Uganda has a modern fleet of Su-30 multi-purpose fighters. This allows South Sudan and Uganda to bomb rebel positions, which are often ill-equipped to defend against air strikes.

In 2014, Ugandan air power played a pivotal role in the capture of several strategically important towns by Kiir’s troops.

For rebels loyal to former vice-president Riek Machar  —  known as the Sudan People’s Liberation Movement-in-Opposition  —  the situation is a bit different. Many rebel fighters are soldiers who defected from the national army.

“The various factions of the SPLM-IO will have access to the weapons they had when they defected to the opposition side,” LeBrun explains.

To get more weapons, the rebels either have to capture them, buy them on the black market, or receive them from state backers.
But the militants do appear to have some foreign support. Ammunition cartridges of recent Sudanese origin appeared at the site of a massacre committed by rebels in May 2014, according to Small Arms Survey.

“It would not surprise us if, as has been suggested, elements of the Sudanese security forces are providing materiel support to the SPLM-IO,” LeBrun says.

Last year, Ugandan forces captured an Igla-1 anti-aircraft missile launcher from the militants. If Machar’s fighters have more where that came from, they can threaten both United Nations and private military company helicopters operating in South Sudan.

South Sudan also has very little domestic manufacturing for arms or ammunition. As the government of a sovereign state, it’s completely legal for Kiir’s administration to go shopping for weapons abroad.

But this kind of overt and covert arms trade — on both sides — could prolong the conflict. When both sides have plenty of weapons, there’s little incentive to stop the killing.

An arms embargo could pressure the warring parties to reach a political solution. Unfortunately, according to LeBrun, “the history of U.N. arms embargoes in the region is not good.”

For example, there’s an embargo in place for Darfur. It doesn’t stop the Sudanese government from flaunting the restriction more or less openly, with arms circulating freely among factions aligned with — or fighting — Khartoum.

To be effective in South Sudan, an embargo couldn’t just focus on the affected country — it’d have to forbid deliveries to all neighboring states, too. This is because end-user agreements that forbid re-exporting weapons are typically not worth the paper they’re printed on. Worse, these measures are close to impossible to enact.
Uganda provides troops, air power and arms to the South Sudanese government. Were an arms embargo to pick up steam, Uganda would likely throw a tantrum — and carry enough political clout to block it.

The international community would also have to convince China.

From drones to AKs, high technology to low politics, War is Boring explores how and why we fight above, on, and below an angry world. Sign up for its daily email update here or subscribe to its RSS Feed here.
Photo: Iranian believed to be a copy of chinese QW 2 anti-aircraft. They have either managed to reverse-engineer the weapon or they are producing it