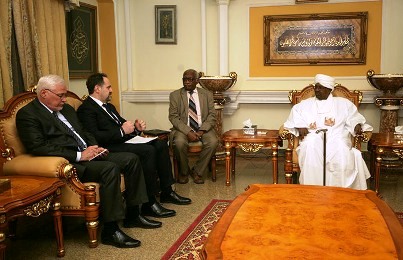 The agreements include three memos of understanding in the spheres of the industry, electricity and investment and three accords , one for the encouragement and protection of investment, another for power stations and high voltage power lines and a third one between the local Farmers’ Bank and the Russian TMS that produces agricultural machinery.

The agreements also include a concession contract between Sudan and the Russian Rus Geology to prospect for oil in Sudan’s Bloc E57 and another accord for the geological mapping of the Jabal Moya area, North Kordofan State. The two sides have also signed an agreement for environment protection and another for cultural cooperation.

The two ministers have signed the minutes of the meeting towards the end of the session. In the same connection, Sudan’s Minister of Oil and Gas Mohamed Zayid Awad has welcomed the desire of the Russian Zarobic Geology Company to prospect for oil in Sudan via modern technology and satellites and to reactivate Sudan’s productive oil fields, with a view to increasing their output.

Receiving a delegation from the company, led by its marketing and promotion manager Vladimir Busch , same day, Awad discussed ways of cooperation with the company and the company’s long experience in oil prospection and geological survey in Africa, the Middle East and Latin America , according to a press statement from the minister’s office.

Busch had highlighted his company’s capabilities and communicated their wish to launch a pilot project for data collection and oil exploration in the Red Sea region “as an initial step for cooperation with Sudan, using modern technology.’’ He said his company cooperates with the Russian space centre and has a serious desire to work in Sudan’s oil and minerals sector. Karuri, the Sudanese Minister of Mining, has reaffirmed his country’s wish to drive its relations with Russia towards wider horizons, pledging to remove all obstacles that may face the company .

In an address to the committee’s closing sitting, Karuri had said that the trade balance between the two countries was far beyond the two countries capabilities , expressing the hope that the trade balance could reach a figure that satisfies the ambitions of the two peoples. He said the ministerial committee , launched in 2013, enjoys the backing of the two countries leaderships . He said this third session of the committee was meant to reinforce cooperation in the areas of mining, oil ,investments, banking, roads and transport, telecommunications, food security and culture.

He said this session was unique in that it had seen ‘’ the remarkable presence’’ of the Russian private sector. Chairman of the Russian delegation Sergey Donskoy has expressed his country’s desire to strengthen its bonds of cooperation with Sudan in all domains. He said his side will do its best to achieve the committee goals . He said Russia was willing to work in the domains of electricity, mines, telecommunications and agriculture, citing the ‘’noteworthy progress’’ in the two countries cooperation.

Meanwhile, Sudan’s Vice-President Hassabu Mohamed Abdel Rahman , who attended the closing sitting, has said Sudan looks at Russia as a strategic partner , hoping for advancing the bilateral relations towards economic partnerships. He also noted the ‘’successes’’ scored by the Russian companies in Sudan , urging the Russian private sector to invest more in his country . Politically , Russia is seen as a major ally of the government of Omer al-Bashir that faces isolation from the West. However the level of economic cooperation between the two countries is very low , with a trade balance that does not exceed $400million.

Russia is a major weapons supplier to Sudan that fights a civil war on three fronts. But the value of Russian weapons to Sudan is usually kept secret. Khartoum had recently hosted the forum for Arab-Russian cooperation, held at foreign ministers level. Meanwhile, Sudanese President Omer al-Bashir has promised to sponsor the agreements between his country and Russia. Receiving the Russian delegation at his residence here, Bashir extended an invitation to the Russian President Vladimir Putin to visit Sudan.

Minister Karuri , who attended the encounter with Bashir, said Mr. Donskoy had appreciated ‘’the lofty stance of the Sudanese Government and its care of the committee meetings.’’ Donskoy said the accords ‘’lay the groundwork for good bilateral cooperation in the areas of oil, energy, mines and geology.’’

Earlier in the day , Donskoy said in a speech before the Sudanese parliament that Russian firms had expressed their desire in partnerships in mining and agriculture in Sudan. He said by these agreements signed today more than ten Russian firms will invest in Sudan. Source: sudantribune