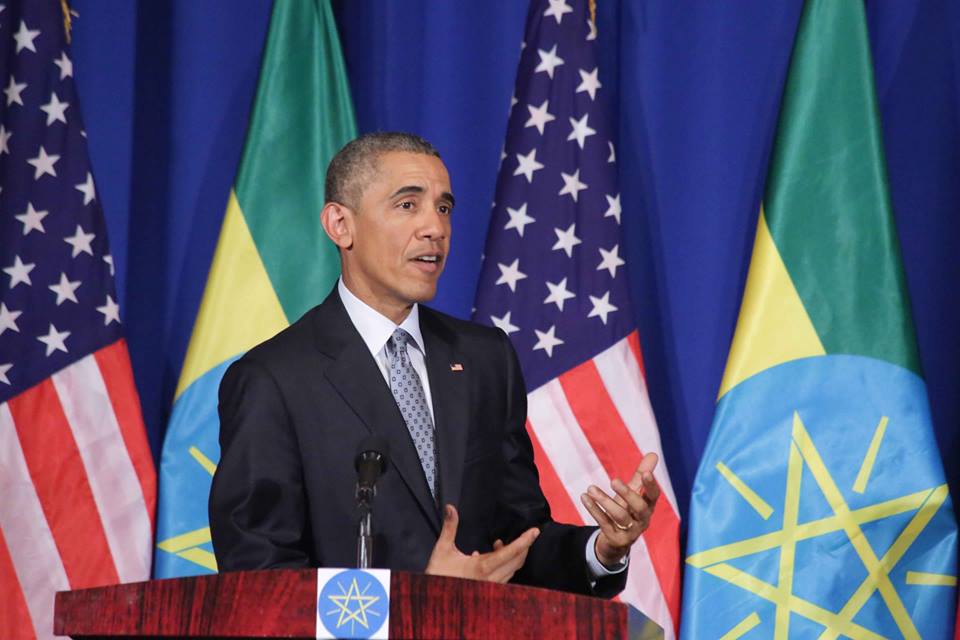 Speaking in the Ethiopian capital Addis Ababa, Obama said the al-Qaeda-affiliated militants offer nothing but “death and destruction”. “Ethiopia faces serious threats,” Obama said. “We’ve got more work to do.”

The comments followed an bloody attack on one of Mogadishu’s most secure hotels, which severely damaged the building killing 15 people including a Kenya diplomat, a Chinese embassy guard and three journalists.
The scale of the truck bomb used against the Jazeera Hotel has stunned Mogadishu, a capital long used to conflict and raises fears of an escalation of force by the al-Qaida-linked al-Shabab group battling the government.
Somalia’s foreign minister Abdisalam Omer told The Associated Press by phone from Djibouti that a Kenyan diplomat was also wounded in the attack.
The attack was claimed by the al-Qaida-linked Al-Shabab group and also wounded some 20 people. The walled, luxury Jazeera Hotel is considered the most secure in Somalia’s capital and is frequented by diplomats, foreigners and visiting heads of state.

“This is really scary – destroying the Jazeera hotel like this means no blast walls can make anyone safe,” said bystander Yusuf Mohammed. The use of huge truck bombs is a relatively new phenomenon and throws into doubt whether any place in the capital is now adequately protected.

While blast destroyed at least eight rooms and stunned the residents of the Somali capital, it wasn’t as bad as it might have been because the truck, which contained a ton of explosives, was stopped at the blast walls outside the hotel.
“The damage is big but a lot less because the truck bomb couldn’t go beyond the walls that lay a few meters from the hotel’s perimeter walls,” said Mohammed Abdi, a police officer.
Nervous soldiers fired in the air to disperse a crowd who surged toward the hotel after the blast as medical workers transported wounded victims into awaiting ambulances.
The attack comes as Somali forces backed by troops from the African Union have launched an offensive, dubbed Operation Jubba Corridor, to push al-Shabab out of its last strongholds. The coalition already has driven the group out of the capital.
In a statement, Al-Shabab said the attack was in retaliation for the deaths of dozens of civilians at the hands of Ethiopian forces, which are part of the AU force, and that the hotel was targeted because it hosts “Western” embassies coordinating the offensive.
The attack came as President Barack Obama was leaving neighboring Kenya for Ethiopia. The president’s visit has included discussions about how to deal with the threat of al-Shabab.
On Sunday, the White House Press Office issued a statement condemning the attack and extending condolences to the families of the victims.

“Despite the very real progress Somalia has achieved in recent years, this attack is yet another reminder of the unconscionable atrocities that terrorist groups continue to perpetrate against the people of Somalia,” the statement read, adding that the United States remains steadfast in its commitment to work with Somalia to bring an end to such acts of terrorism.