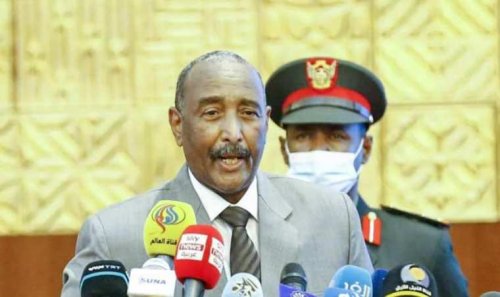 December 1, 2020 (KHARTOUM) – The head of Sudan’s Sovereign Council Abdel Fattah al-Burhan told the U.S. Secretary of State Michael Pompeo that his country would not normalize relations with Israel unless that the Congress passes an act restoring its immunities.

On Monday, Pompeo spoke with al-Burhan about Sudan’s removal from the terror list said the State Department without further details.

The New York Times on Tuesday reported that Pompeo wanted to determine a date for the signing ceremony of a normalization agreement between Sudan and Israel which imposed by Trump administration as a condition for Sudan’s delisting from the blacklist.

Al-Burhan “made clear that the East African nation would not move forward with warming ties with Israel before Congress passes the so-called legal peace legislation,” said the New York Times.

The newspaper added that Pompeo reassured his interlocutor that the immunity act would be approved in the coming weeks.

The legislation to immunizes the Sudanese government from any future cases will allow the payment of compensations to the victims of embassies attack and USS Cole, under the agreement reached by the two countries.

“Trump administration officials are already planning a signing ceremony with Sudanese officials at the White House in late December”.

Many in Khartoum were wondered by the U.S. top diplomat discussing the matter with the head of the Sovereign Council while the foreign policy is determined and conducted by the prime minister.

The move is seen as a volt face from Trump administration which had backed the civilian government of Abdallah Hamdok but now speak about al-Burham as de facto ruler of the country when they realized he is more favourable to normalize with Israel.

Ilan Goldenberg, the director of the Middle East Security program at the Center for a New American Security, for his part, said that the Trump administration used the removal from the State Sponsors Of Terrorism List as a political tool.

“The whole thing felt forced all along by an administration that wanted to use a terrorism designation as a political tool to try to get normalization with Israel,” Mr Goldenberg said. “When you cook up these kinds of very transactional deals with unrelated items that don’t make much sense, this sometimes happens.”

Sudanese are also angered by the opposition of some Democrat Senators who obstruct the vote of legislation restoring Sudan’s sovereign immunities for electoral gains saying the Sudanese government should also pay compensation for the victims of September 11 attacks.

This week, the Sudanese prime minister said the Congress would endorse the immunities legislation on 11 December.