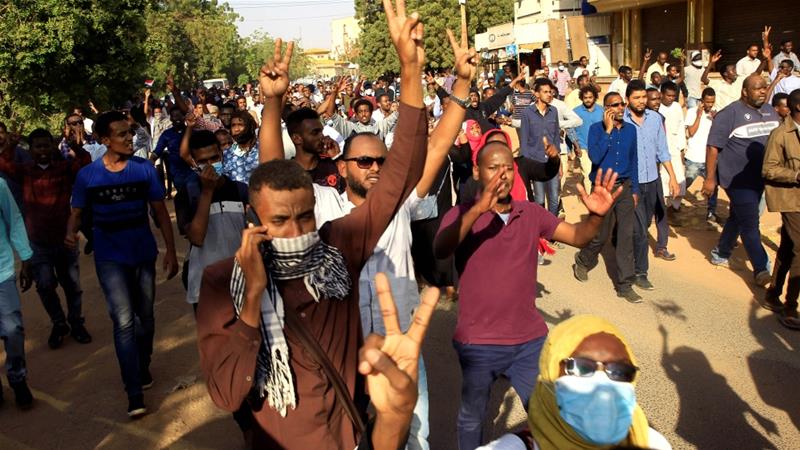 February 7, 2019 (KHARTOUM) – Thousands of Sudanese took to the streets on Thursday in Khartoum downtown calling on President Omer al-Bashir to leave, in a continuation of anti-government protests that have begun 50 days ago.

Also, despite calls to avoid excessive use of violence against the peaceful demonstrators, the security forces fired tear gas to disperse the protests and carried out mass arrests of protesters after beating them.

Thursday protest was the largest one ever organized in Khartoum city. The protesters chanted “freedom, peace, justice” a slogan they used to repeat since last December.

However, the heavy security deployment in the Arab market area in central Khartoum prevented the protesters from reaching another gathering point leading to the Sudanese presidency their final destination.

The security forces dispersed them with heavy tear gas, which was also thrown at shops to force their owners to close it.

All the roads leading to the presidential palace were closed with security barriers, the large number of protesters marched south to al-Qureshi Park and from there they headed to the Daim neighbourhood.

During a meeting with President al-Bashir on Wednesday, Sudanese journalists called to not use security agents or militiamen of the ruling National Congress Party and to deploy only the riot police to break up the demonstrations.

But, on Thursday’s protest, the security agents were there to arrest and beat the demonstrators.

Eyewitnesses told Sudan Tribune that the security forces exerted excessive violence against the demonstrators, mostly girls. Large numbers of them were arrested before to jail them in a facility of the security services in Khartoum North.

The protesters were careful not to destroy the properties of individuals or the goods of street vendors. So, they stopped a march until the traders collected their goods, also they collected money to repair the front glass of a vehicle they broke accidentally.

In the neighbourhood of Burri, east of Khartoum, the demonstrators closed many streets, and the police cars equipped with gas launchers were seen rushing towards the area across the Nile Street.

Sudanese journalists told al-Bashir on Wednesday that the anti-government protests are not only in the street but also entered in every house and have become a social fact.

The Sudanese Professionals Association (SPA) which coordinates the demonstrations called for a protest in Omdurman next Tuesday and another one in Khartoum next Thursday.

The National Umma Party of Sadiq al-Mahdi issued a statement hailing Thursday’s demonstration pointing that it confirms that the Sudanese people are “determined to succeed in its revolution”.

It further said that the Sudanese people adhere to the peacefulness of the protests and; they will accept nothing other than the resignation of the regime.