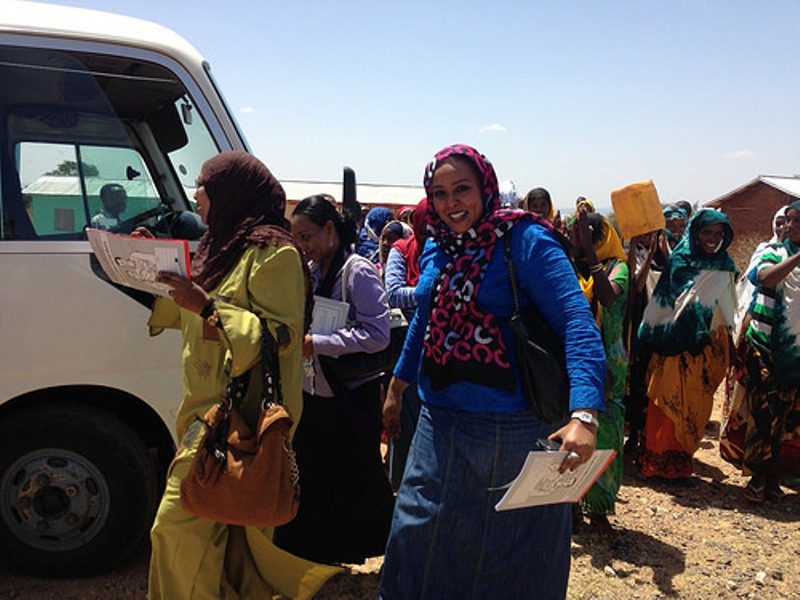 A group of Sudanese journalists are visiting major development works in Ethiopia including the Grand Ethiopian Renaissance Dam (GERD), the light railway and housing projects in Addis Ababa. The group which includes 32 journalists was briefed about the GERD by the project manager, Engineer Simegnew Bekele. Group members said that the Dam which is being built by Ethiopia’s own resources has great benefits to Africa.

The journalists mentioned, that they have learnt, the GERD would be instrumental in fishery, tourism development and research purposes in addition to power generation. They also mentioned that the GERD will have benefits to the basin countries in preventing flooding and evaporation, which in turn reduces water wastage. The group members also added that they were able to witness themselves that the construction of the GERD is being conducted in a manner that meets international standards.

They further noted that they were able to understand from the briefing that the GERD will not cause any appreciable harm to downstream countries. Khalid Al Malik, a journalist, said the construction of the GERD and the Addis-Khartoum tarmac road will have greater role in further consolidating the relation between the two brotherly people.

Meanwhile: The arrival of Ethiopian troops to Juba in southern Sudan

I arrived the first batch of 90 men-strong peace-keeping forces to the Ethiopian capital, Juba, southern Sudan, as elements of the forces of deterrence and protection of the regional organization IGAD. Also, all of Rwanda and Kenya are supposed to send troops to the force, but they did not Tfla after. Despite the arrival of Ethiopian troops to Juba two weeks ago, but the withdrawal of the Ugandan contingent almost impossible to view the current time because the forces of regional deterrence is still less than 2,500 men.

However, these events put Ethiopia at the center of efforts to restore peace to southern Sudan, and highlights its role as a regional player is important, but the question remains about how they will link between the Ethiopian army and the Ugandan army and the order of this the leaders of the top of the two armies to hold more than one meeting during the months years.
It is worth mentioning that along with Riek Machar in the conflict demanded the withdrawal of Ugandan troops as a prerequisite and a precondition for progress in the peace negotiations.