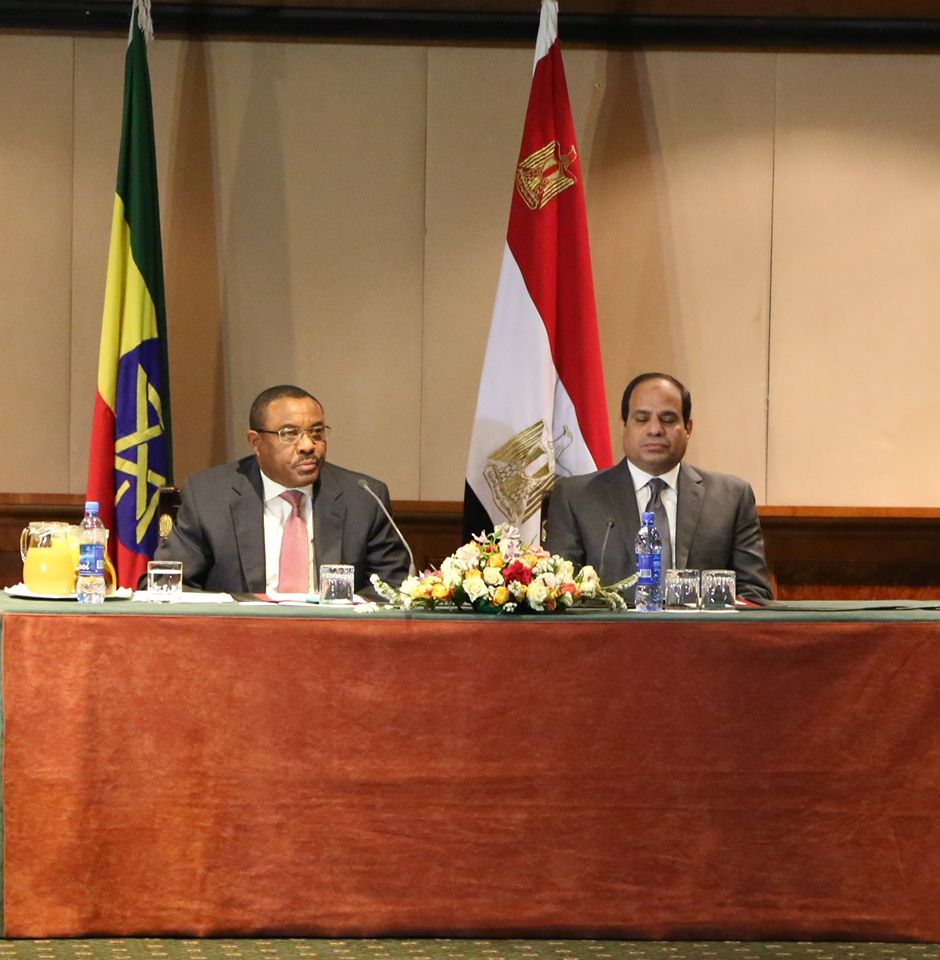 EthiopianPresident Dr Mulatu Teshome welcomed President Abdel Fatteh El SiSi of the Arab Republic of ‪#‎Egypt‬ at the National Palace on Tuesday (March 24). President El SiSi is on a three day state visit to ‪#‎Ethiopia‬. During their discussions, President Dr. Mulatu expressed his appreciation of the effort Egypt is making to deepen the relationship between the two sisterly countries of Ethiopia and Egypt, both in general and over the issue of ensuring equitable water utilization. He mentioned, in particular, the signing of the Declaration of Principles with reference to the Grand Ethiopian Renaissance Dam (GERD) on Monday in Khartoum.

President Mulatu said this showed that by working hard we could change suspicion and misunderstanding into mutual cooperation, trust and confidence, and at the same time expand and deepen the relationship between the two nations. President El SiSi emphasized that Egyptian peoples had open minds and hearts, not just because of their historic ties and close cultural relations with the

people of Ethiopia but also because of their desire to transform relations into a state of trust and confidence. President El SiSi said that the two sides had now taken a step forward but there was still much to do in the future. President Mulatu agreed on the need to strengthen bilateral relations and build mutual trust and benefit. He stressed that Ethiopia was constructing the GERD purely for power generation. It was committed to green development and this would be beneficial for all, Egypt, Sudan and Ethiopia.

He pointed out Ethiopia was concentrating on the fight against poverty and on enhancing sustainable development. Elements of this included reversing deforestation and enriching the flow of water. He underlined that Ethiopia’s processes of industrialization and green development would in fact contribute to Egypt’s share of the water of the Nile. Sustainable development, equitable utilization of the Nile waters and the signing of these would determine the destiny of the signatories. President El SiSi

welcomed President Mulatu’s comments and the reassurance of Ethiopia’s commitment to mutual benefits. He said Egypt had a clear stance: it supported Ethiopia’s Development and was ready for cooperation. This was nothing new. It was reiteration of its previous position. He welcomed the signing of the Declaration of Principles but what was most important was to advance all agreements into binding legacies for future generations, promoting integrity, and interpreting our commitment and determination on the ground.

President El SiSi said the Nile water and the GERD should not be the limit of cooperation. Ethiopian and Egypt should strengthen this in all fields to provide both sides with mutual prosperity.