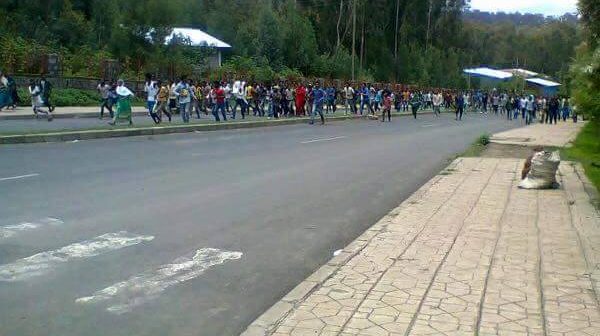 Bahir Dar (HAN) August 24.2016. Public Diplomacy & Regional Security News. By Engidu Woldie. The bougainvillea palm city of Bahir Dar was turned into a ghost city for the third day on Tuesday as residents held a stay at home protest. Government offices, businesses and transportation was shut down in this new wave of protest in the Amhara region where at least 150 people were killed by snipers of the TPLF regime in the first week of this month.

The streets of this otherwise hustle and bustle town were tranquil on the third day of the stay at home protest. The initial plan was to hold a three day protest starting Sunday but it was not clear if the shutdown would continue.

Last week, the other major town in northern Ethiopia, Gondar, was shut down for three days as residents stay home protesting the killings perpetrated against peaceful protesters by regime forces.

What began as a protest against the forceful incorporation of the people of Wolkait and their land into the Tigray region has now grown into a demand for the removal of the brutal regime in Addis Ababa, where Tigrayans control every aspect of the lives of the people. Protesters in Amhara and Oromo regions demand for the end of a complete domination of the country by one ethnic group that represents only 5% of the population.

In Debark, another town in Gondar, 10 people were seriously injured in the crossfire as regime forces clashed with residents who began a three day stay at home protest on Tuesday denouncing the killing of their compatriots in Gondar and Bahir Dar.

Witnesses told ESAT that the forces have also attacked the staff of the Debark Hospital who joined the protest. Gunfire could be heard in the town for hours on, the witnesses said.

According to information reaching ESAT, the protest has spread to Kola Diba, Chuahit and Gorgora towns.