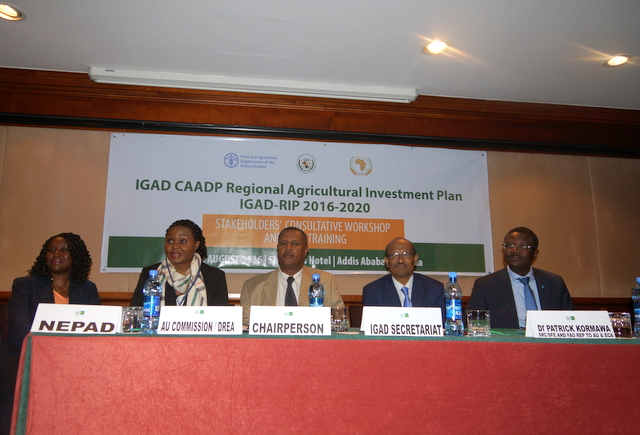 This workshop is organized with the technical and financial support from the Food and Agriculture Organization of the United Nations (FAO), and in close cooperation with the African Union Commission (AUC). It will engage stakeholders in the review of the Investment Program Areas (IPAs) detailed in the IGAD-RIP and in the preparation of the official validation by Ministers of IGAD Member States on 31 August 2016. 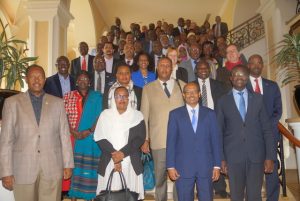 The IGAD/CAADP framework was set up to strengthen capacities of the stakeholders by playing a key role in attaining the objectives of IGAD/CAADP as well as respect the principle of subsidiarity between the different levels of public action at regional, national and local levels with the guidance, involvement and support of IGAD.

The framework is in line with the AU Summit of Malabo Declaration of June 26, 2014, a follow up of the Maputo 2003 commitment to formation of the New Partnership for Africa’s Development (NEPAD) and implementation of Comprehensive African Agriculture Development Programme (CAADP) that was later formulated to national CAADP Compact and Investment Plans through a mechanism for coordination and management of aid within the institutional and financial framework.

The workshop was officiated by the IGAD Chair, Ministry of Agriculture and Natural Resources of Ethiopia and CAADP Focal Person Mr. Zena Habtewold who appreciated the initiative to bring together experts and putting agriculture on the forefront for a food secure and agriculturally developed Africa.

Mr. Mohamed Moussa, Director of Agriculture and Environment Division on behalf of the Executive Secretary of IGAD, in his opening remarks noted that the IGAD region is well endowed with natural resources hence has great potential to develop and have economic growth through the revitalization of the agricultural sector for shared growth and improved livelihoods in the IGAD region and Africa as a whole.

The Sub-regional Coordinator for Eastern Africa and FAO Representative to AU and UNECA, Dr. Patrick Kormawa commended IGAD for its commitment to the CAADP framework and pledged their continued support and collaboration to touch and change lives of people on the African continent through the implementation of the IGAD-RIP at national and community levels.

The Acting Director of the Department of Rural Economy and Agriculture of the African Union Commission (AUC-DREA), Dr. Janet Edeme highlighted that the AU 2014 Malabo Declaration that later brought forth CAADP has the enhancement of investment finance in agriculture as one of the key commitments as well as boosting intra-African trade in agricultural commodities in order to halve poverty and end hunger in Africa by 2025.

The recommendations and final IGAD-RIP will be presented for validation by the Ministers from the IGAD Member States on August 31, 2016 in Addis Ababa in the presence of the State Minister of Agriculture and Natural Resources His Excellency Ato Wondirat Mandefro from the Federal Democratic Republic of Ethiopia and the Executive Secretary of IGAD Amb (Eng) Mahboub Maalim who will officiate the event. This event will be followed by a Business Meeting later in the year.