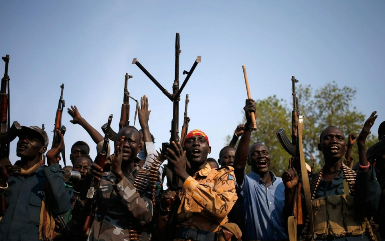 After the clashes in Juba last July and the appointment of Taban Deng Gai as First Vice President to replace SPLM-Io leader Riek Machar, the two warring parties have resumed clashes in different areas of the country.

In a statement extended to Sudan Tribune, SPLA-IO Spokesperson William Gatjiath Deng said their fighters clashed with the government army in Bazi at the South Sudan-DRC border, Morobo in Central Equatoria and Kaljak in Unity state.

On Tuesday 16, November 2016, the gallant forces, the SPLA/IO have taken the full control of the following towns; Bazi at the South Sudan-DRC border, Morobo in Central Equatoria and Kaljak in Unity state.

Deng alluded to the recent by the SPLA on their positions adding they would not continue to remain in self defence.

“We must take an excessive force to fight this autocrat, ethnocentric regime, since it has chosen unrest and continual belligerents in the country,” he said.

“The SPLA-IO, shall always refrain from systematic massacres, abuses of human rights and violation of international humanitarian law in all warfronts of South Sudan,” added.

After the failure of the ceasefire, the SPLA-IO on 14 November said they would not participate in a workshop the Joint Military Ceasefire Commission (JMEC) organize in Juba, stressing the need to revive the peace agreement and to restore the liaison offices deployed across the country.

The rebel official also said that the 20 aid workers rearrested by their forces around Nhialdiu payam have been released and moved into Bentiu since Monday.