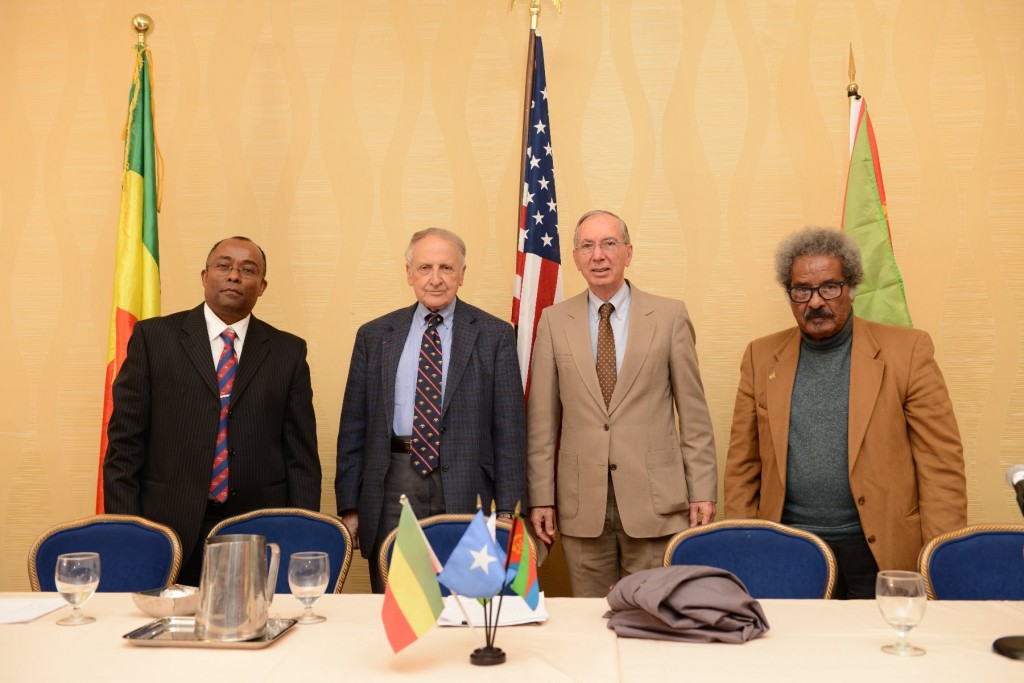 Washington (HAN) October 23, 2015 – Public Diplomacy and Regional Security and stability Initiatives News.  On Sunday October 18, 2015 a successful one-day long conference was held at Georgetown Marriott Hotel, 1221 22nd St NW, Washington, DC 20037. The theme of the conference was on the present and future relationship between Eritrea and Ethiopia and had conflict prevention and resolution threads. The panelists range from former United States diplomats and State Department officials to former government officials of Ethiopia, senior academics, authors, professionals and social and political activists. The conference was organized by Vision Ethiopia, a network of Ethiopian academics and professionals residing in the United States and Japan, in collaboration with the Ethiopian Satellite Television and Radio (ESAT). The number of people who attended the conference was at full hall capacity. The audience had ample opportunities to ask and express diverse view points on a variety of current and sensitive issues affecting Ethiopia and Eritrea. The full conference audio and video is available and will be transmitted to the people of Eritrea and Ethiopia very soon. Although there were four panel sessions scheduled only three sessions were delivered because of lack of time. They all focused on historical, social, cultural and professional dimensions of building and rebuilding trust between the two related people, the role of super powers and regional powers in the Ethio-Eritrea relationship, and the risks and opportunities of establishing fraternal relationship between the Government of Eritrea and the Ethiopian political organizations.


The first of the three panel sessions was moderated by Professor Getachew Begashaw. The four panelists were Mr. Tariku Debretsion, Mr. Gashaw Gebre, Dr. Assegid Habtewold, and W/t Lulit Mesfin. They all presented their well researched and documented papers that were well received by the audience. As a prelude to the ensuing two sessions, drawing on their vast experiences of engagements and studies, these four panelists talked on the roles of Ethiopian and Eritrean Community leaders in building people-to-people relationship at different levels, how much the basic principles of peaceful co-existence of nations can be foundations for peace between the two countries and the region as a whole, and how social and professional organizations, including but not limited to churches, mosques, professionals and men and women of the Arts can create useful links and elevate the relationship to an even higher level.
The second session was moderated by Professor Minga Negash. The theme of the session was on the roles and interests of foreign powers in the regional peace, security and stability. On the panel were former senior diplomats of the United States, Ambassador Herman Cohen, Former Assistant Secretary of State and Ambassador David Shinn. Their tenure at the State Department coincided with the collapse of central government of Ethiopia and the takeover of Addis Ababa and Asmara by the TPLF/EPRDF and EPLF in 1991, and the 1998-2000 war between Ethiopia and Eritrea. They were joined by the veteran critical scholar of Ethiopia, Professor Emeritus Mesfin Wolde Mariam. There was a candid discussion about the United States’ policy failure towards Ethiopia and Eritrea. Ambassador Cohen revealed that Eritrea’s relation with the United States is unlikely to change during the term of office of President Obama.

He was also open about what transpired in 1991. He revealed that the crisis in Somalia is a threat to the United States and its policy appears to be driven by a singular concern for security. For Ambassador Cohen Ethiopia must accept the boundary commission’s ruling and start engaging Eritrea on all other matters. He underscored that both governments do not trust one another. As regards to the lifting of the UN sanctions against Eritrea he informed that it was only the the United States that used its veto power to block the lifting. He also revealed his efforts to engage in second tier diplomacy and organizing expert level discussion between the two countries.

Drawing from his experience as an Ambassador, Dr. Shinn went on straight to the identification of the powers that have interest in the region. He classified them into a two tier countries and acknowledged the United States’ influence must be examined in light of other countries’ interests. For Ambassador Shinn accepting the boundary commission’s ruling was evident and did not spend time on that. He was more cautious about the prospect of peace and urged that more work needs to be done to prevent another cycle of conflict. The European Union, China, and regional powers are also important and noted that much of what happens in Ethiopia is influenced by regional powers.

Professor Mesfin was unforgiving in letting his audience know that successive Ethiopia governments, including the current regime, were clients of super powers, and Eritrea is being punished for resisting dominance by the United States. The old Ethiopian ethos of not bending to foreign powers and pride exists only in Eritrea, as manifested by the behavior of the Eritrean government and in contrast to the behavior of the regime in Addis Ababa in relation to foreign powers, Professor Mesfin Woldemariam asserted.

As a peace activist he regretted that the peace proposal he initiated before the collapse of central government in 1991 was not supported by the United States. He highlighted the double standards of the United States, and compared Ethiopia and South Africa’s reconciliation. He also urged that Ethiopians must take ownership of their own destiny and start building and rebuilding the relationship with Eritrea. In general, there was a consensus about the successes and failures of U.S diplomacy in the area. And all the three panelists explained the economic incentives that are available from reconciliation and cooperation between the two countries.

Nine participants from the audience presented varieties of questions. Most of them were directed to Ambassador Cohen and Ambassador Shinn. There was no unanswered question that was important. The questions to Professor Mesfin were more focused on seeking his guidance. The session closed with vote of thanks and a call for the continuation this type of productive panel discussion. The session took more time than was originally planned because of the interest shown by the audience. The panel closed with a sense of satisfaction.

The third session started after a brief lunch break. The session was moderated by Professor Messay Kebede and the theme of the discussion was on relations between the Eritrean Government and the Ethiopian opposition forces. Ambassador Dr. Kassa Kebede, former minister and diplomat of the Ethiopian Government under Dergue, Mr. Erimias Legesse, former deputy Minister of government communication under TPLF/EPRDF, Dr. Mesfin Abdi of the recently formed Oromo Democratic Front and Mr. Neamin Zeleke of the recently merged Patriotic Ginbot 7 were on the panel. Read more Read more Here