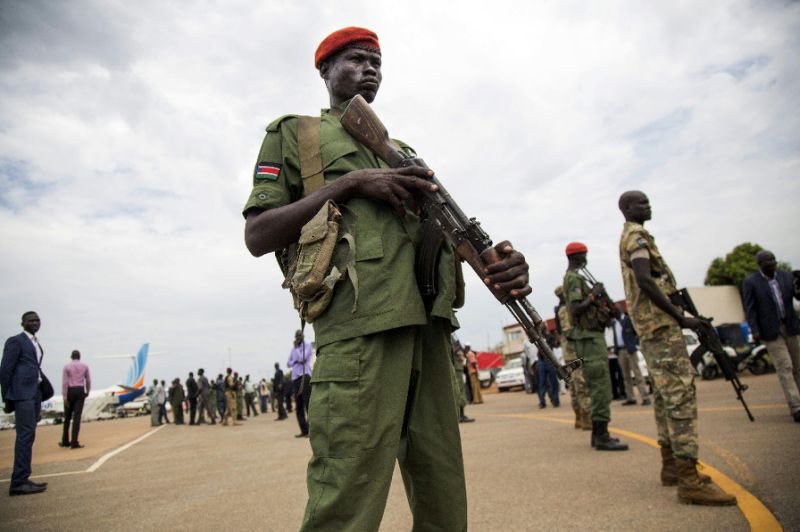 Heavy fighting had been going on between forces of the Sudan People’s Liberation Army (SPLA) loyal to President Salva Kiir, and the SPLA in Opposition (SPLA-IO) loyal to First Vice President, Riek Machar.

Hundreds of soldiers have been killed on both sides for the cause none of the two leaders could explain.

On Monday, probably in response to the mounting pressure from the international community, the two leaders agree to cease fire.

President Kiir issued an order read on the national TV by his information minister, Michael Makuei Lueth, in which he declared the ceasefire.

President Kiir, according to the unilateral ceasefire ordered all government forces to return to their units and barracks.

The order gives all the government forces up to 12midday on Tuesday to cease hostilities, stop roaming the streets while carrying military weapons and in uniforms, and return immediately to their barracks. He warned that failure to adhere to the order would subsequently be followed with serious measures.

It remains unclear what motivated the decision of the president after an apparent total breakdown of command to control the manner in which government soldiers conducted themselves for the past four days, including breaking into shops and mercilessly looting them, instead of providing protection to the lives of the civilians and their properties.

The main Jebel market, located South west of capital, Juba, as well as Gudele in the west and markets in the residential areas inside Juba town, the capital of the new nation, were ransacked by the government soldiers using military vehicles to carry the loots.

President Kiir called on his army commanders to control their forces and that they should return to their barracks by Tuesday at 12 noon time. It was not clear why the ceasefire did not immediately come into effect and had to take another 24 hours to come into effect.

On his part, Machar on Monday evening also said he agreed to the cessation of hostilities in Juba with immediate effect from 8pm local time on Monday.

In a document he signed seen by Sudan Tribune, Machar called for “Disengagement of forces and immediate withdrawal of SPLA from SPLA IO positions.”

The opposition leader also called for intervention of a third party force to create a buffer zone.

“Ensuring the security and safety of SPLM IO leaders, members of advance team and the members of SPLM IO,” the document said.

He also called for review and operationalization of transitional security arrangements of Juba, Malakal, Bor, Bentiu and other areas in the country “as per Chapter two of the Agreement on the Resolution of the Conflict in the Republic of South Sudan.”

The decision by the two top rival leaders came after members of the United Nations Security Council expressed shock and outrage at the attacks on U.N. compounds and protection of civilians’ sites in Juba following clashes on Sunday.

In a strong worded statement, the United Nations called on the parties to ceasefire immediately and protect the lives of their people.

The Security Council particularly protested the attack on the premises of the United Nations, demanding that those who attacked UN premises must be held accountable. The statement revealed that Chinese and Rwandan peacekeepers had been killed or injured in the attack.

The statement further added that the Security Council was ready to consider enhancing the capacity of the UN mission in South Sudan “to better ensure that it and the international community can prevent and respond to violence in South Sudan.”

The U.N. Security Council also emphasized that regional actors should attempt to bring an end to recent violence.