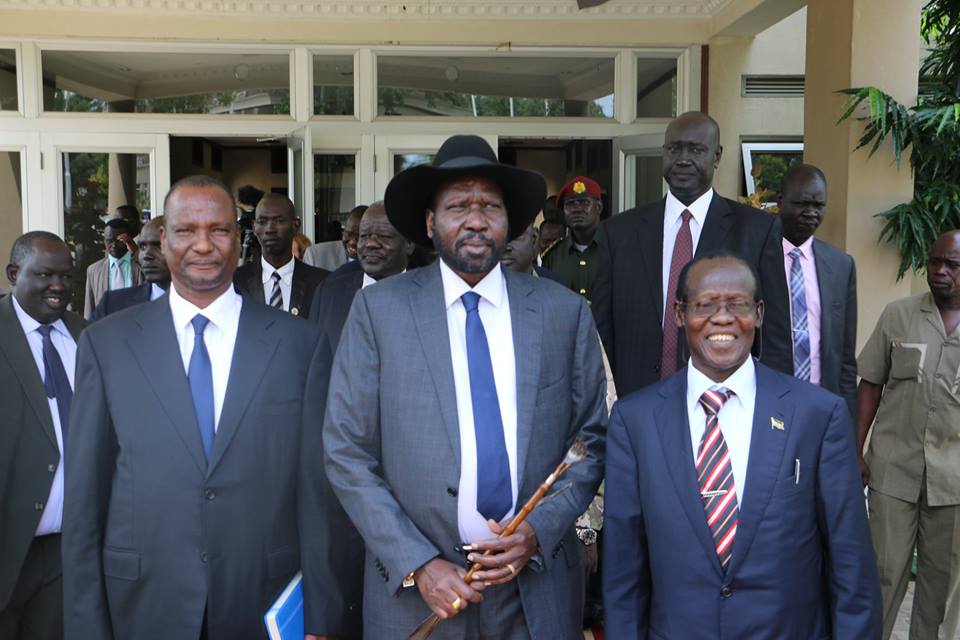 JUBA (HAN) July 29.2016. Public Diplomacy & Regional Security News. Rival South Sudanese leaders’ spokespersons have clashed over interpretation of how a “temporary” replacement of Riek Machar, as First Vice President, should have been handled in accordance with the Article 6 of the provision of the August 2015 peace agreement.

This is after President Salva Kiir replaced Machar and appointed Taban Deng Gai, an ex-official of Machar’s faction when a group of senior leaders of the armed opposition faction of the Sudan People’s Liberation Movement (SPLM-IO) nominated Gai on 23 July in a process challenged as “illegal” by Machar’s faction.

Gai and his group announced publicly that the nomination was “temporary” and that Gai would step down from office if Machar returned to Juba after two weeks of absence when he and his forces were forced out from the capital after clashes with forces loyal to President Kiir.

The process has attracted controversy and counter-interpretations when referred to the provisions in the peace agreement.

Article 6.4 reads: “In the event that the post of the First Vice President falls vacant during the Transitional Persiod, for any reason, including mental infirmity or physical incapacity of the office holder, the replacement shall be nominated by the top leadership body of the South Sudan Armed Opposition as at the signing of this Agreement.”

Ateny argued that Machar had been away for two weeks and his whereabouts was not known, thus giving the right to his faction to nominate someone to take over the SPLM-IO party and the SPLA-IO army, and also gives the President the right appoint his replacement as First Vice President.

Machar’s spokesperson, Dak, however counter-argued that the agreement did not give President Kiir to power to appoint Machar’s replacement on a “temporary” basis, saying this is not there under the current circumstances.

Dak said it should have been the First Vice President who “may delegate” one of his senior officials in the party to act on his behalf until he returned, referring to Article 6.5 of the agreement.

Ateny said even if Machar comes back to Juba, he will not be reinstated as First Vice President and will have to first go through reinstatement by the SPLM-IO led by Taban Deng, or else “will not be seen again” if rejected.

Dak argued that Machar was forced out of Juba and asked for deployment of a third party force so that he could return to Juba, from “around Juba”, adding that President Kiir had no power to appoint his replacement per the “temporary” absence as stipulated in the peace agreement.

He also argued that the process to nominate Taban Deng Gai, was “illegal” because Gai was dismissed from party a day before he convened the “illegal meeting” and also there was no SPLM-IO institution that sat and nominated him. He said only five officials of the top leadership nominated him with no required quorum.

“H.E. Dr. Riek Machar is “legally” still the First Vice President of the Republic of South Sudan. That “illegal” replacement in Juba – which violates the August 2015 peace agreement – will soon be deemed null and void,” Dak posted on his Facebook page on Thursday.

He also accused President Kiir of taking part in the conspiracy with Taban Deng to become the First Vice President so that he could help him “destroy the peace agreement.”

Ateny however fired back, saying the United Nations was not “telling the truth” or those who criticized President Kiir’s action did not read well the peace deal. (ST)

The issue of Opposition leadership is an internal matter. It is not for the United Nations to pronounce itself on a decision made by the individual parties to the accord.

The United Nations Mission in South Sudan (UNMISS) will continue working with the Transitional Government of National Unity and all stakeholders in support of the implementation of the peace agreement for the benefit of the South Sudanese people as mandated by the Security Council.

We call on all parties to ensure that the ceasefire is maintained and that any divisions within the Opposition, or between the parties, be dealt with peacefully through dialogue.