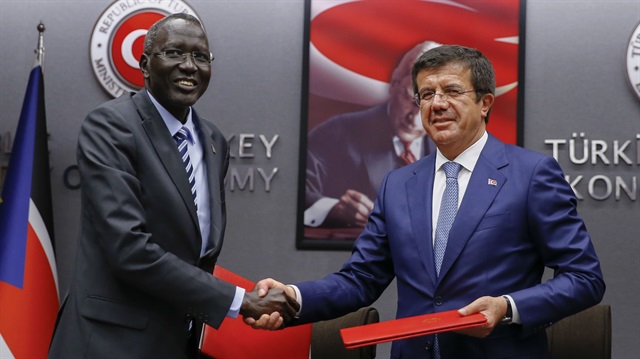 In a statement extended to Radio Tamazuj on Wednesday, South Sudan’s Finance Minister, Stephen Dhieu Dau, who is currently in Turkey on an official visit, said he met with his Turkish counterpart Nihat Zeybekci in Ankara where they signed a cooperation agreement on Wednesday.

Dhieu reiterated his government’s commitment to enhance bilateral relations between the two countries.

He pointed out that agriculture, livestock, education, healthcare, energy, fishery, mining, science and technology would be the primary areas of interest under the agreement.

The South Sudanese minister noted that he has also invited the Turkish minister of economy to visit South Sudan.

For his part, Nihat Zeybekci, Turkey’s economy minister, expressed his happiness about the signed cooperation agreement with South Sudan.

“This agreement is an important step in improving economic and trade cooperation between our two sisterly countries and will immediately open the doors for Turkish investors to explore South Sudan’s potential in mining and minerals, agriculture, livestock and fisheries, among others,” he said.
The Turkish minister further expressed his willingness to travel to South Sudan with potential investors as soon as possible to broaden the cooperation agreement. Sources: radio tamazuj.