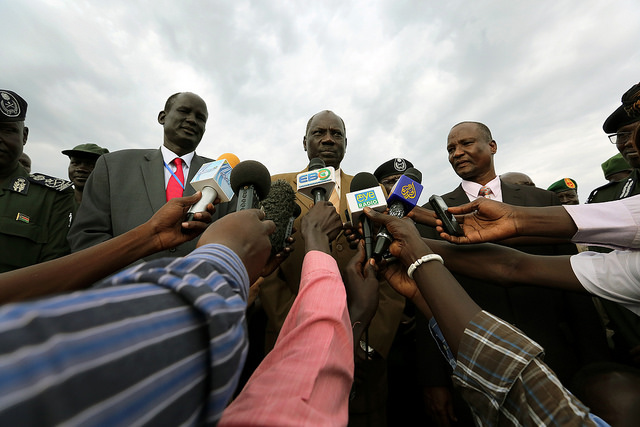 JUBA (HAN) July 31.2016. Public Diplomacy & Regional Security News. It’s a nightmare of any journalist: to be locked up without charge and with no end in sight.

But imprisoned reporters usually have hope in knowledge that, on the outside, their editors are working around the clock to ensure their safe release. Think, for example, of the campaign by Al Jazeera to free their three journalists arrested in Egypt in 2013.

Unfortunately for one jailed journalist in South Sudan, however, his employers appear to have all but abandoned him.

George Livio of the UN’s Radio Miraya has been locked up by South Sudan’s National Security Service since 22 August, 2014. There have been no charges announced against him, in contravention of South Sudanese law requiring detainees to be quickly released if not charged. Yet ever since Livio was arrested almost two years ago, his employer, the United Nations Mission in South Sudan (UNMISS) which runs Radio Miraya, has never publicly called on the government to set him free. Not in a press release, nor radio broadcast. Not in a speech nor at a press conference. Not even at events organised by the UN to mark World Press Freedom Day earlier this year.

“The UN has not done anything about George Livio,” says Edmund Yakani, a civil rights activist in Juba who has publicly lobbied for Livio’s freedom. “They are just quiet for the last two years.”

Yakani knows about getting journalists out of prison. When reports emerged that detainees were being killed in the town of Yambio, Yakani’s quick actions led to the release of a radio journalist from a National Security prison in just a few days.

By contrast, after Livio was detained, it took UNMISS nearly a month to even publicly confirm his arrest.

“From day one they have not spoken out,” says Yakani. “Why is UNMISS scared? The UN has to answer some questions, because he was an employee of the UN.”

Furthermore, UNMISS’ silence has come despite allegations that National Security Service agents torture their prisoners. Two weeks ago, Amnesty International said one of Livio’s fellow detainees, Loreom Joseph Longie, died after being beaten in NSS custody. He was also tortured with melted plastic with pins stuck in his genitals, the rights group said.

It’s hard enough being a reporter in South Sudan.

Nine South Sudanese journalists have been killed since 2015, including one shot in the back just days after President Salva Kiir threatened to kill reporters, and another allegedly shot in the face with his hands up just shortly after he had been arrested and released by authorities.

Journalists are regularly detained and threatened. In July, veteran editor Alfred Taban was arrested for two weeks despite his age and deteriorating health. Other reporters have been abducted, tortured and burned with melted plastic and dumped in cemeteries. Some have fled the country altogether.

Sadly, UNMISS also has a poor record when it comes to press freedom.

Recently, for example, the mission blocked journalists for over a week from entering their sites in Juba where tens of thousands of civilians have taken shelter amid reports of potential war crimes. When reporters finally gained access, they discovered that UN troops had stood by while soldiers raped women outside their gates.

In February, UNMISS attempted to forcibly block journalist Justin Lynch from investigating an armed attack on its Malakal base. And last year, the mission restricted this reporter from visiting its base in Bentiu amid reports of war crimes near that town.

UNMISS aren’t making things much easier for their own employee Livio either.

UNMISS is mostly alone in its silence over Livio’s arrest. Livio’s family, Amnesty International, activists like Yakani, and fellow journalists have repeatedly called for his release. Yet UNMISS, a billion dollar peacekeeping mission with over 12,000 armed troops mandated by the UN Security Council to protect civilians in South Sudan, remains quiet.

One Radio Miraya staff member told African Arguments that Livio’s colleagues at the station have tried to raise the issue to their superiors, including to UNMISS’ deputy head Moustapha Soumaré, but that their pleas have been ignored.

“Anytime we meet in these staff meetings, we raise it,” the Radio Miraya journalist said, speaking anonymously for fear of retribution from his bosses. “They say, ‘we are aware about it, we have met, our security are going to handle it’, but still nothing is being done.”

Earlier this year, I asked former UNMISS spokeswoman Ariane Quentier if they would publicly call for her colleague’s release. “This is not something raised publicly through press releases or public calls,” she said. “It is something followed with local security agencies, human rights and the UN [department for safety and security].”

That strategy hasn’t worked for the last 23 months, but it doesn’t appear UNMISS is willing to try a different one.

During a recent press conference broadcast live on Radio Miraya, I asked UNMISS chief Ellen Loj, who assumed her role the same month Livio was jailed, if she would publicly call for his release, something she’s never done in her entire time as his employer.

She didn’t. She also didn’t condemn Livio’s prolonged detention or the fact he has never been charged with any crime. She didn’t even say Livio’s name.

“There are three national staff members of UNMISS detained by National Security. One of them is the gentleman in question,” she replied.

Loj claimed that UNMISS has raised the issue of release “over and over again” with authorities, presumably behind closed doors. She added that UNMISS staff try to visit the detainees to ensure they are safe.

“We are never forgetting those three staff members and are doing whatever we can to assure their release,” she concluded.

But Livio’s Radio Miraya colleague disagrees. “They are doing nothing to release him,” he says.

To him, UNMISS’ public silence over their detained staff member feels like betrayal. “It can happen to any one of us, so that is how we will end up,” he says. “They just need our services, but when we need their services, they don’t care.”

UNMISS came to South Sudan to help build the newly-liberated nation, but the example they are setting in terms of transparency and accountability is poor. Later this month, Livio will mark his two years behind bars. It’s surely time for his employer, UNMISS, to say something.

Jason Patinkin is a freelance journalist based in Juba, South Sudan. Follow him on Twitter at @JasonPatinkin.