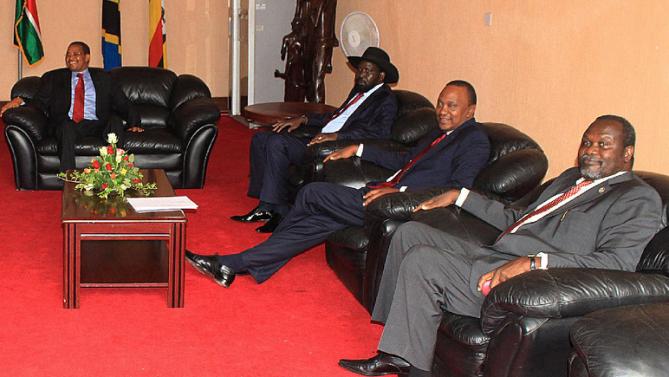 JUBA (HAN) April 11. 2016. Public Diplomacy & Regional Security News. South Sudanese government has rejected a proposal by the head of the Joint Monitoring and Evaluation Commission (JMEC), Festus Mogae, to facilitate a first meeting between President Salva Kiir and the First Vice President designate, Riek Machar, upon his return to the country.

The government argued that the arrangement for the meeting between the two top rival leaders should be the normal work of protocol officers.

South Sudanese information and broadcasting minister, Michael Makuei Lueth, told reporters after a regular council of ministers meeting that a meeting between president Kiir and Machar falls within the responsibilities and duties of the protocol officers and not the work of a third party.

“The council resolves that no meeting should be arranged between his Excellency the president of the republic and Riek Machar by a third party. The meeting between the Vice President and the President is a process that is usually handled by the protocol officers,” said Lueth.

“There is nothing that needs the JMEC (Joint Monitoring and Evaluation commission),” he added.

He assured that the state protocol would organize the meeting between the president and his designated first vice president.

He also reminded that even the meetings between President Kiir and his current deputy in government, James Wani Igga, does not need a third party to facilitate it.

“When Wani Igga wants to meet the President, does he need a facilitator?” Lueth asked in a statement broadcasted by the state owned South Sudan Television (SSTV).

The government’s official spokesperson was reacting to a proposal by the chairman of the Joint Monitoring and Evaluation Commission, Festus Mogae, who chairs the body which oversees the implementation of the peace agreement.

However, observers say a meeting between the two rival leaders is not an ordinary interaction between a president and deputy and would therefore need the presence of a third party as there are outstanding issues to be tackled by the two leaders.

The meeting would also be the first in eight months after the principals of the two warring parties signed a peace agreement in August last year to end 21 months of civil war.