Home frontpage In South Sudan, power flows from the barrel of a gun; this... 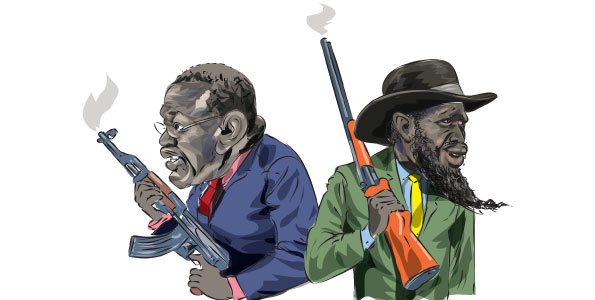 By Majak D’Agoôt and Remember Miamingi . There is no end in sight to South Sudan’s manmade apocalypse so long as its ruling “gun class” runs the show.

These ethno-regional, sectarian warlords have benefitted from the conflict through organised violence and plunder. On a number of occasions, they have organised pogroms against their own people on the grounds of ethnicity, political affiliation and social geography. The gun class has tapped into age-old ethnic cleavages to ensure that power flows, literally, from the barrel of the gun.

The gun class in South Sudan consists of cliques of “former liberators” and former Khartoum-sponsored counterinsurgency warlords who fought on both sides of the civil war during the decades-long liberation movement for South Sudan.

These individuals include the current President, Salva Kiir (a liberator), and his former deputy turned armed opposition leader, Riek Machar (once a liberator turned a counterinsurgency warlord).

The combination of corruption, violence and intense ethnic mobilisation deployed by the gun class on their own citizens has hijacked the nascent state and its future stability and prosperity. Irrespective of the side they are currently fighting on, the objectives of the gun class remain the same – setting their country on a permanent trajectory of fragility and instability for personal gain.

In her recent book, the former head of the UN Mission in South Sudan (UNMISS), Hilde Johnson, identified the transformation of the security sector as the main roadblock to state building.

Indeed, the absence of political will among the ruling gun class to reduce the number of soldiers and weapons in circulation or reform and professionalise the security sector is the reason there is peace and stability in South Sudan. In the words of Jeremy Astill-Brown, this is a military with a country and not a country with a military – and is, in fact, inching towards a country without a state.

Just this past July, the reckless high-stakes gambling of the gun class reached unprecedented levels when they slammed their foot on the accelerator of violence at the exact moment when they should have applied the brakes.

For five days, between 8 and 11 July, full-scale fighting returned to the capital city Juba and sent the newly returned first vice president and armed opposition leader Riek Machar back into the bush, fleeing for his life. In his absence, President Salva Kiir handpicked a member of the opposition, Taban Deng Gai, to replace him, and effectively split the opposition into two in what has been described as the Pax Salvatica.

Now that the peace agreement has been rendered disabled, the government has sought to consolidate its power and has intensified brutal attacks against civilians, including sexual violence, criminality, and the closure of any public space for dissent, including the illegal detention of journalists under South Sudan’s own laws.

The US special envoy to South Sudan, Donald Booth, recently testified in front of the US Congress. He remarked: “We are of course concerned about adherence to the terms and the spirit of the peace agreement, but at the same time it is not for us to tell South Sudan who its leaders should be… Now, given all that has happened, we do not believe it would be wise for Machar to return to his previous position in Juba. But this cannot become a justification for President Kiir to monopolise power and stifle dissenting political voices.”

The intransigence and sense of impunity of Juba’s gun class has been enhanced by the lack of accountability for their actions.

Despite recent visits to South Sudan and the region by top US diplomats John Kerry and Samantha Power, efforts to restore the status quo ante or hold leaders to account have failed.

While it is true that the US and other great powers should not determine who South Sudan’s leaders should be, the US and the UN do have an obligation to the people of South Sudan to ensure that those who perpetrate horrific atrocities are not simply allowed to remain in power with the full support and consent of the international community. So far, the gun class has proven immune to diplomatic threats in the absence of concrete consequences for their actions.

The reality at the moment is that South Sudan has already relapsed into civil war. The deployment of a regional protection force under the UN peacekeeping mission should be premised on allowing for the political reengineering of the fractured deal under a new architecture of a caretaker administration agreed to by all stakeholders, including faith-based and civil society groups.