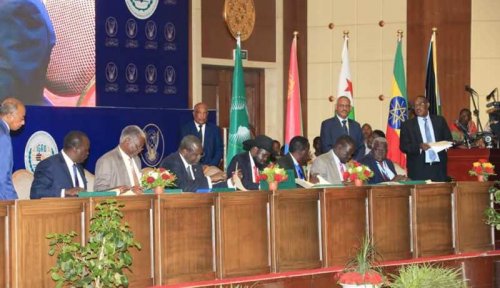 In line with the 12 September agreement, the NCAC has to draft a constitutional amendment bill to incorporate the peace pact into the constitution.

Also, the IGAD mediated deal provides that the revitalized agreement shall prevail in the event of any inconsistency with the constitution.

In an open letter to the acting chairman of the Joint Monitoring and Evaluation Commission (JMEC), the SPLM-IO Deputy Chairman Henry Diar Odwar said the IGAD’s implementation mechanism has violated the revitalized peace agreement when it drafts an article speaking about a decentralized system to be implemented during the transitional period.

’’South Sudan Is governed on the basis of a decentralized democratic system and is an all-embracing homeland for its people. It is a multi-ethnic, multi-cultural, multi­lingual, multi-religious and multi-racial entity where such diversifies peacefully co-exist provided that during the transitional period the RTGNU shall devolve more powers and resources to the lower forms of government as shall be agreed by the parties,” reads the contested article.

For the SPLM-IO deputy chairman, this article, which violated the revitalized peace agreement, had not to be adopted by the 15-member NCAC which led by an IGAD representative.

The reconstituted NCAC includes 5 members from the incumbent government, 2 SPLM-IO, 1 SSOA, 1 FDs, 1, OPP, 2 Representatives of IGAD who will are the Chair and Deputy Chair of the Committee,1 Civil Society, 1 Women and 1 Youth representatives.

Furthermore, the SPLM-IO underscored that the peace agreement does not include a provision entrusting the government with the devolution of power to the lower level territorial administration.

” Nowhere in R-ARCSS is there a mandate or provision to retain a decentralized system of governance during the Transitional Period,” stressed the letter.

Before to make public its open letter to JMEC acting chairman, the SPLM-IO sought to dissuade the constitutional committee in vain from endorsing the IGAD drafted disposition through written correspondence mentioned in the letter.

The region’s system of governance has been of the main causes of the five-year in South Sudan. Also, it remains the principal grievance, together with the wealth sharing for the holdout opposition groups.