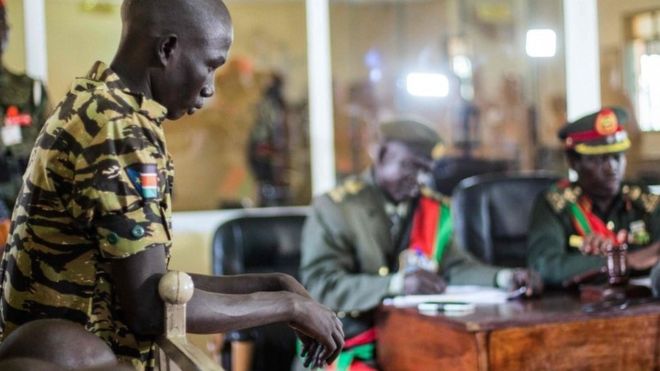 A military court on Monday began hearing the trial of an army general charged with treason for allegedly plotting a rebellion against President Salva Kiir’s government.

Major General Stephen Buoy Rolnyang has been charged with “treason, offenses related to insecurity,” as well as disobeying military orders, according to the army’s deputy spokesman Brigadier General Santo Domic.

He is being tried by a seven-member military court panel constituted by army chief General Jok Riak.

Buoy was arrested in May last year in northern Mayom, after defying military orders to report to army headquarters in Juma, said Domic.

The spokesman added that after he defied these orders, Buoy and the troops in his division unilaterally decided to move to Mayom — a move interpreted as defection to wage rebellion.

“It is the prerogative of the commander-in-chief and the chief of defence forces of the army to see to it that justice must be done in cases related to insecurity,” said Domic.

The court postponed the trial to next Thursday after Buoy’s defence team complained the ranks of those on the court panel were inferior to their client.

It is rare to see a general go on trial in the war-torn country, and Buoy’s case is only the second involving senior military personnel since the conflict broke out in 2013.

Since then nearly 400,000 people have been killed and millions forced from their homes or to the brink of starvation.

In early 2014 a high court in Juba tried four senior generals, who were also politicians, for treason. They were later pardoned and released without sentencing.

They later named themselves the Former Detainees, and are now a signatory to a peace deal signed in September 2018 which is the latest effort to end the protracted conflict.

While observers point to a drop in fighting since the deal was signed, there have been repeated reports of violations of the ceasefire, while armed groups not party to the agreement continue to clash, notably in the greater Equatoria region.