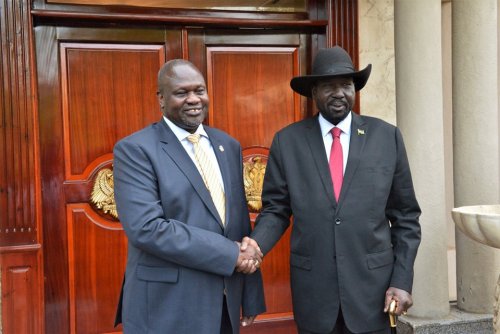 Chergui made the remarks at a meeting with United States officials in Washington Friday last week.

“This maybe is the last chance for them to respond to the will of their people. South Sudanese are tired of war,” he said.

The meeting was held a week after South Sudan’s President Salva Kiir and opposition leader Riek Machar agreed to delay key benchmarks in the peace accord by 100 days.

The U.S said it was “frustrated” by South Sudan’s rival leaders for failing to form a unity government as scheduled, casting doubts on their ability to lead the country’s peace process.

Tibor Nagy, the US Assistant Secretary of State for African Affairs said a lot of “tools” are available and the US will not hesitate to use them if South Sudan’s warring parties fail to form a transitional national unity government by next year.

“Rest assured, there are available mechanisms, tools available and I’m not going to go any – into specifics, but I can assure you also that the entire international community is hyper-mobilized,” he said last week.

He said the US recognizes the “horrible” suffering that the South Sudanese people have had to endure, and pledged Washington’s support to the population in the young nation.

Last week, the US, through its aid arm (USAID) provided $92.5 million in humanitarian assistance for people affected by the ongoing conflict and food insecurity in South Sudan.

The latest donation, it said in a statement, brings the US humanitarian assistance to the people of South Sudan to nearly $4.68 billion since the country’s crisis began in 2013.