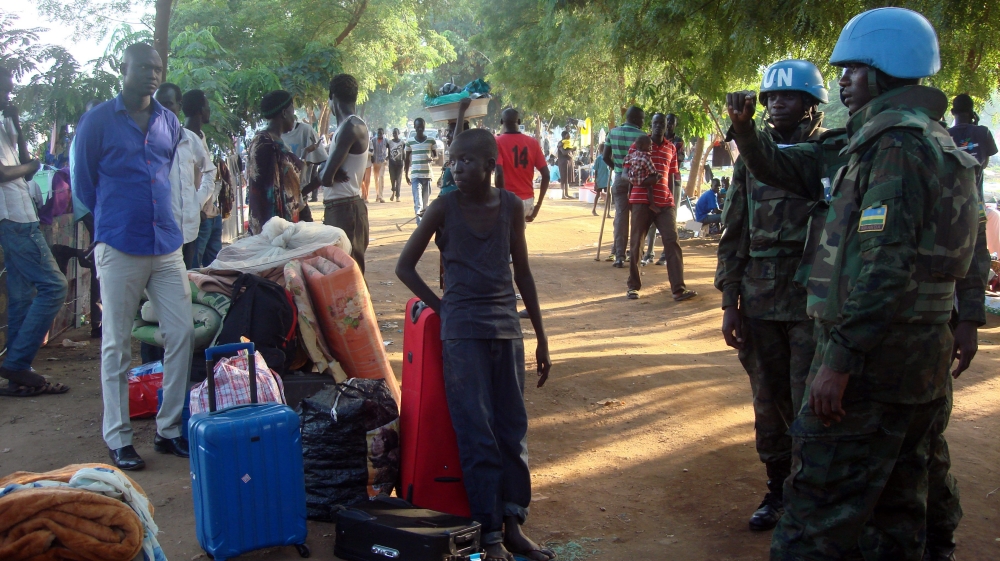 JUBA (HAN) July 17.2016. Public Diplomacy & Regional Security News. Renewed fighting in South Sudan that has killed more than 300 people is set to dominate an African Union summit that starts in the Rwandan capital Kigali on Sunday.

A shaky ceasefire has held since late on Monday after fighting raged for four days in the South Sudanese capital Juba, forcing 40,000 people to flee their homes.

The violence echoed fighting that triggered the civil war and marks a fresh blow to last year’s deal to end a bitter conflict that began when President Salva Kiir accused ex-rebel and now Vice President Riek Machar of plotting a coup.

The unrest has also plunged into doubt a peace deal signed in August 2015.

Al Jazeera’s Catherine Soi, reporting from Juba, said the ceasefire appeared to be holding but that there was a sense of uncertainty in the city.

Locals, she said, were wondering about the whereabouts of Machar, who has been in hiding.

“What is certain is that he has not left the country,” Soi said. “But he says he still feels his life is in danger and until his safety is guaranteed he will not come out.”

Speaking to regional grouping IGAD in Kigali on Saturday, UN Secretary General Ban Ki-moon said a “critical stage” in the South Sudan crisis had been reached.

“Now is the time to send a strong message to the South Sudanese leadership,” he said.

“The people of South Sudan have been let down by their own leadership. Their hopes and dreams have been tarnished at the expense of warring parties enriching and empowering themselves. We cannot and will not tolerate this.”

The AU will also seek to hammer out a solution to a crisis engulfing Burundi where a spate of killings have rocked the country since President Pierre Nkurunziza’s announced he would seek a third term.

Also on the crowded agenda will be the ongoing fight against the Boko Haram armed group that has its roots in northern Nigeria but has carried out attacks across the Lake Chad region.

Recent violent incidents in the Central African Republic and the Democratic Republic of Congo are also expected to feature in the talks.

Efforts to secure peace in the South Sudan and elsewhere, however, will be complicated by divisions over who should succeed Nkosazana Dlamini-Zuma as chair of the AU’s new commission.

Several countries on the continent have indicated that they do not back any of the leading candidates for the job, arguing that they lack stature.

Now all three of the leading candidates – Botswana’s Foreign Minister Pelonomi Venson-Moitoi, her Guinean opposite number Agapito Mba Mokuy and Uganda’s former vice president Specioza Wandira-Kazibwe look like they may fail to get a majority of votes from the African Union’s 54 members.

If that happens the vote could be abandoned and re-run at the next AU summit in January 2017.