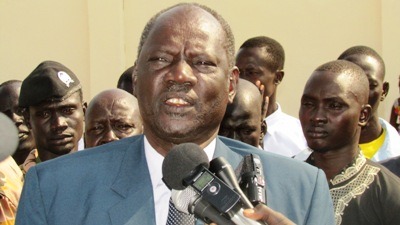 JUBA (HAN) June 29.2016. Public Diplomacy & Regional Security News. South Sudan’s government said lack of assistance from the international donors has slowed down the implementation of the peace agreement which ended 21 months of civil war between rival top leaders and armed factions in the country.

In a press conference conducted on Tuesday in the national capital, Juba, information minister Michael Makuei Lueth, who is the official spokesperson of the government, said security arrangements could not be implemented due to “lack of resources.”

He called on donors to assist the country by availing money for the implementation of the peace deal which President Salva Kiir and his first deputy, Riek Machar, signed in August last year.

“Those who made their promises up to this moment have not come forth,” Lueth told reporters in direct reference to the donors.

“Our friends and partners [donors] should abide by and respect their promises,” he said.

The official said cantonment areas in Greater Equatoria could not be identified and established because the government had no money to do so.

In the statement broadcasted on the national TV on Tuesday evening, Lueth said further stressed that is need for shelters to be arranged first in the cantonment areas before soldiers can move into such assembly areas.

He lashed at those who blamed the government for not implementing the peace deal, saying the agreement would not be implemented without the needed resources.