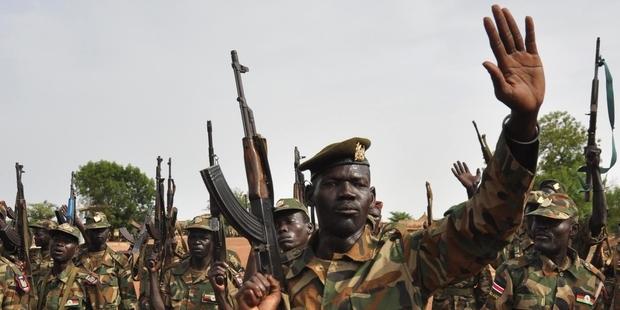 JUBA (HAN) September 4.2016. Public Diplomacy & Regional Security News. The South Sudanese army (SPLA) has declared that the country was not under any worrying security threats after it allegedly contained armed activities in various areas in Central and Western Equatoria which the armed opposition leader, Riek Machar, used as an escape route to Congo.

Speaking at a press conference held at the army headquarters on Friday, Military Spokesperson Brig Gen Lul Ruai Koang described as “stable” the security situation in the country .

“SPLA is glad to tell you that we have succeeded in containing spread cases of insecurity that happened in July in Juba. It is to acknowledge that insecurity spread to some areas, but those had been contained to some extent,” he told reporters in the capital, Juba, on Friday, the same day where a visiting United Nation Security Council delegation arrived the country from New York.

“Frankly speaking, the general security situation is not bad as its being painted by some elements against peace and stability. SPLA general headquarters would like to once again assure about the ability and capability to maintain law and order across the nation,” he added.

SPLM-IO officials reported that recent clashes took place this week in Eastern and Central Equatoria states between Torit and Liria.

He admitted some attacks were carried and showed a level of sophistication and coordination that affirms the presence of organized criminal activity perpetrated by anti-peace elements.

Meanwhile the chief of staff, Paul Malong Awan, said in a separate meeting with senior military officers that it was their duty to create and build confidence in civil population and to assure that security situation was stable and encourage them to return to their homes to resume their normal activities.

“It is our duty to create an enabling environment so that we build a confidence in the civil population by letting them know we are their protectors, not their enemies. We should now work hard to ensure that all the civilians are safe. We also need to come out that security is under control”, said Awan. (ST)