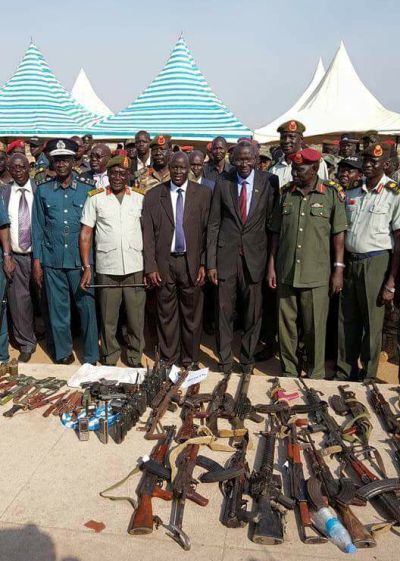 General Paul Malong Awan spoke at the end of a house-to-house search operation during which more than 1200 different types of weapons were collected, following the conduct of the unannounced exercise at the national capital, Juba.

General Awan, dressed in full military attire and flanked by the minister of finance and interior well as the commander of presidential guards division put on a show of defiance, emphatically denying that government forces carried out the search in a manner that violated privacy in the capital, Juba.

He accused “anti-peace elements” of preparing to go to war on the basis of “lies”.

He commended his boss, President Salva Kiir, for demonstrating personal commitment to the Armed Forces allegedly guided by a vision to protecting the nation and making Armed Forces not only as one of the most developed armies but which would serve anywhere in the world.

“Our job as the army is one, defend the country, the constitution and protect civilians and their properties. This is what you have done; conducting a search to ensure Juba is free of weapons. People who are not permitted by law to carry weapons should not be allowed to carry them. They are misusing them and this is why we are collecting them today,” said Awan.

Acting army spokesperson Col. Santo Domic Chol told reporters on Thursday at a news conference in Juba that the operation had managed to collect more than 1200 different type of weapons and assorted equipment as well as managing to apprehend criminals in Juba.

400 weapons were found in the hands of unauthorized people.

Chol said nine people have been arrested found in possession of cars they could not explain how they got them.

Some of the cars were identified by their owners and 16 other different types of cars have either been stolen or none registered have been detained.