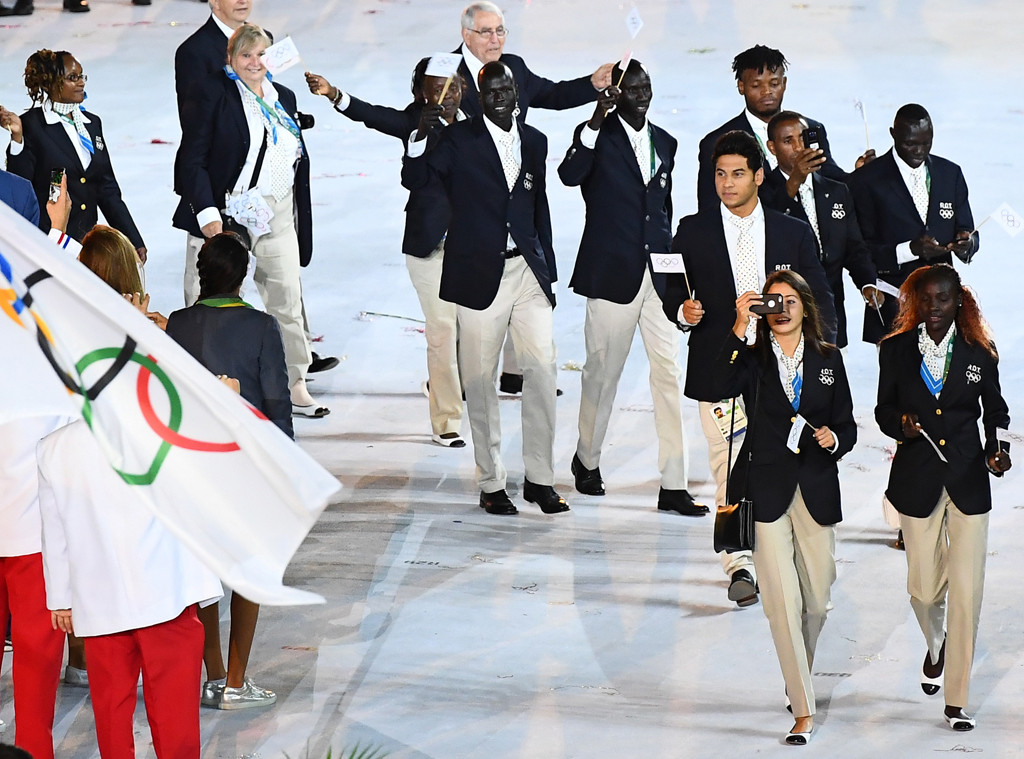 Rose Nathike Lokonyen, a 23-year-old South Sudanese runner, led the first-ever Refugee Olympic Team into the stadium behind the banner of the International Olympic Committee (IOC) to cries of support from an ecstatic crowd.

The young athletes, originally from South Sudan, Syria, Democratic Republic of the Congo and Ethiopia, have won friends and admirers in Brazil with amazing tales of triumph over adversity.

Rose was eight years old when she fled war and found safety in the remote Kakuma refugee camp in northern Kenya and has lived there ever since.

“I feel very excited. This is the first chance for the refugees to participate in the Olympics and to give us hope, for us to encourage the young generations of fellow refugees who are remaining in the camps maybe to continue their talent,” she told UNHCR in an interview before the ceremony.

“Being a refugee doesn’t mean you are not a human being.”

President Obama sent the refugee athletes a message of support shortly before they took to the stadium floor ahead of the host nation Brazil.

“Tonight, the first-ever #TeamRefugees will also stand before the world and prove that you can succeed no matter where you’re from,” he declared.

For Rose and her teammates, the prospect of an appearance at the Olympic Games – the pinnacle of sporting achievement – was a very distant and unlikely dream only a few months ago.

“For us it started just few months ago, so we cannot compare our times with those who are high level but we shall try our level best… Being a refugee doesn’t mean you are not a human being like others even though they undermined us. We can do what others can do,” she told UNHCR in a recent interview after a gruelling training session.

The Opening Ceremony kicked off with a spectacular celebration of Brazilian art and culture. With an estimated billion people watching worldwide, Brazil showcased its famous music and dance.

The show featured some of Brazil’s top musicians, including the composer Caetano Veloso, Gilberto Gil, the pop singer Anitta, the funk musician Ludmilla and MC Soffia, a 12-year-old rapper.

It began with a spectacular sound and light show tracing the origins of the life in the Brazilian jungle, with Portuguese explorers arriving on sailing ships among the indigenous tribes, followed by a section that depicted the arrival of millions of African slaves over 400 years.

It went on to show the rise of the cities in the 20th century, featuring a tightly choreographed scene in which athletes performed acrobatics on blocks piled up to resemble skyscrapers. It ended with a warning about the dangers of global warming. The young athletes, originally from South Sudan, Syria, Democratic Republic of the Congo and Ethiopia, have won friends and admirers in Brazil with amazing tales of triumph over adversity.

When Rose’s family in Kakuma refugee camp heard the news, they expressed delight.

“Am so happy she will be the one holding the flag,” said Rose’s younger brother Tom Namilo. “I will be happy to see my sister carrying the refugee flag.”

A year ago, her teammate Yusra Mardini was swimming for her life when the inflatable dinghy she boarded to cross from Turkey to Greece started sinking in the Aegean Sea. Now, in a scarcely believable change of fortune, the 18-year-old from Syria is competing against the best in the world.

“We do not speak the same language (and) we are from different countries, but the Olympic flag unites all of us together and now we are representing some 60 million people around the world. We are really happy together, as a team. We want to do our best to show everyone that we can do everything we can for being good athletes and good people,” she told UNHCR in a recent interview.

Earlier this week, IOC President Thomas Bach presented the entire 10-member team one by one to all members of the IOC and paid tribute to the UN Refugee Agency, UNHCR, for having stood by the athletes and helped create the teams in a 20-year-long association with the Olympic body.

“These athletes set the example of peaceful coexistence in the whole world. They show that it is possible to engage in competition and live in peace together at the same time. This is the true spirit of Olympic unity and diversity,” he declared.

He thanked UNHCR for helping make the team a reality.

“Without its (UNHCR’s) assistance it would not have been possible to select, train and make them (the refugees) travel to be here today. Their participation in the Olympic Games is a sign of hope to all refugees worldwide. They did not have a country or a flag to compete with. But now they have,” he said.

“People think we do nothing in a refugee camp.”

Rose’s compatriot, Yiech Pur Biel, 21, also a runner, has been a refugee for half of his life. He said he considered the IOC and UNHCR to be like the parents he barely knew.

“People think we do nothing in a refugee camp, but we do. We can never forget what IOC and UNHCR made for us, being like a mother and a father. We feel we belong to the community, as equal human beings. This (the Olympics) is the beginning of life and will change our life forever. Thank you all and God bless you.” Amid tears and smiles of joy, the athletes have been feted since arriving in Rio for the Games. On Thursday, they received a visit from UN Secretary-General Ban Ki-moon. He wished them well and said they were making history for refugees all over the world.

The Pope joined millions of other people around the world wishing the Refugee Olympic Team the best of luck.

“I extend my greetings and wish you success at the Olympic Games in Rio – that your courage and strength find expression through the Olympic Games and serve as a cry for peace and solidarity. Through you may humanity understand that peace is possible,” he wrote in a message of support.

Honorary IOC President Jacques Rogge, one of the main architects of the team, has spoken passionatelyabout the importance of sports in the lives of young refugees and displaced people.

“These are young people, for the most part. They have a lot of assets to gain in life, and they have the right be considered as normal citizens,” he said.