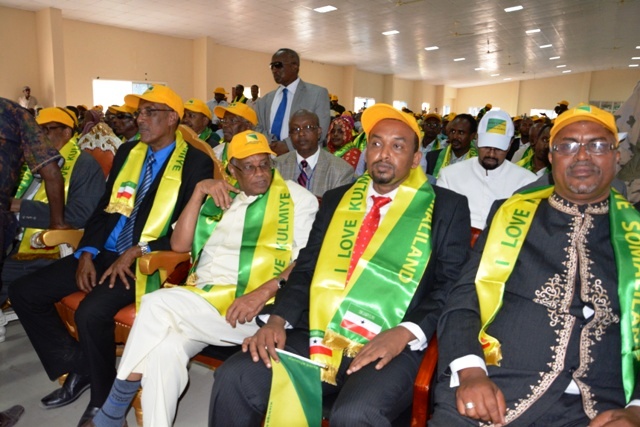 HARGEISA (HAN) November 4.2016.Public Diplomacy & Regional Security News. By Abdirahman Mohamed Dirye.Why tri-junta of Kulmiye party look so happy despite the breakup of their party? Almost a two-third of the proponents of the party escaped and shifted to opposition party Wadani whose charismatic leadership open for criticism and challenge. The Kulmiye party top leadership is ex-military men and feels comfortable chatting to each shutting down any fair or constructive criticism of their decisions and political approaches. The party since the president passed on to his military successors, looks much like paramilitary unit apolitical feeding orders to low ranking officers to chew and vomit actions. Muse Bihi is said to love conformity and yes-men circle often tell him what he pleased to hear in advance. Yesterday the third officer Hassan Sacid former police officer rumored to criticize how the backbone of the party left the party but Muse frowned his face, he changed the topic to how the good mood of party hosts were in the UK fund-giving. It’s obvious the three persons holding the party’s leadership have common denominator: military background, and exercise blind loyalty, therefore, “birds of a feather flock together” to avoid cognitive dissonance and not to shed light the party weaknesses and strengths to rectify the former. “Dadkii ma anigaa ka hadhay, raaliyo maanigaan ahayn”. Song with political lyrics.

The success or failure of a party often depends on compelling aspects of persona of the party boss. The characters of Kulmiye junta are not all nice: authoritarian tendencies leading to fear of anyone who tries to criticize his decision out of good faith to prevent a grave mistake from happening again. His colleagues accuse Muse Bihi of ‘tough’ overconfident man who likes to get his way whenever his views come under attack as he considers them “infallible”. Some say he knows his weaknesses but he justifies with the following “ I am a son of Camel from both parents—meaning to the roughness of Camel shepherds—and military by job, how do you expect me of conciliatory and possessing unifying image?” however, this inadequate explanation as all soldiers not uncompromising.

Despite homophily, commanders in chief love sheepish obedience and military salute. Kulmiye’s junta love to receive applause and warm reception wherever they go but nothing else. The party senior politicians if any left had no input to the grand strategy. The three soldiers congratulate each other when the party core planners run away. Overconfidence, absence of complaining, and sticking to a point until the last passenger jumps out of the sinking boat because third-rate soldiers like captains, consider to accept defeat as shame. Sadam and Ghadafi , both amateur soldiers, did that until their countries disappeared they were laughing out of deep sorrow and successful failure ‘die while laughing’.

It’s also obvious that soldiers are trained to murder and destroy not to build countries and spare lives. Muse and his deputies who are military men by profession are no exception. The first public polity he held just killed off sounding much like President Siyad Barre. Everything he touches turns controversial and often tragic. Would the party see transfer of power peacefully? Many are very doubtful. Selecting a private secretary without violence and bloodshed can be viewed as a cause of celebration.

This year alone, Muse Bihi sued dozens of security guards and sentries of institutions following their denial of access to institutions he thought to be his own!

It’s a time to wake up for the three ex-soldiers of Muse Bihi and Mohamed Kahin, and Hassan Siciid, the Secretary-General who put their differences aside to chase power! Somaliland had seen military leadership that killed off according to Africa’s Watch, 50,000 people by a brutal regime of Mogadishu who was Somali, as we are, Sunni, Shafici as we are; felt their power grip is threatened thus launched deadly attacks. Be aware of military men taking power in the cloud of maintaining democracy, that never happened in history, soldiers are slow learners of mistakes and they are easy to murder if dispute arises among themselves never mind others.

Opinion polls taken in schools, mosques in a nationwide revealed that the Wadani party will win in landslide victory in the next elections 2017 but the party worried if Kulmiye could remain hanging on cracking within. but not to the extent of UCID the ‘puppet’ party that died in the hands of its founder. They want Kulmiye to fake election campaign.

Muse Bihi campaigns of being Mujaahid, offensive word to Awdal and Sool and to other voters who dislike of war and destruction. “I can’t outperform the president whose term is up, sorry s I can’t do it” said Muse Bihi during tour in the diaspora in the UK. He shot himself in the foot. He has been a victim of miscalculation, and recklessness. Voters saw Tahbriib or human trafficking soaring, unemployment, state institution weakening, commercializing of Quran teachings going online, and Somaliland diplomatically dwindling in full view of Kulmiye party and they don’t want to see that again happening under mediocre leadership worse than Silanyo president. And that’s a reasonable, isn’t? People aren’t caged only get release when voting open. Public disenchantment with the ruling party Kulmiye party is high therefore; no one wants to see it again.

Greatest men of his party regard Muse Bihi blundering amateur in all aspects of politics, well equipped with self-defeating tactics, a boon to Wadani party. Upon examining his political and military life spanning decades but with little achievement one can see his avoidable gaffes. Born to pastoralist tribes of both parents and military man by training, he regards his visionary cousins of peasants inferior to him and often cowards unworthy of consultations but they’ve to raise funds alone and follow him deafly smelling him if they want to and wait orders to implement. Muse thinks the party a personal property and the rest guests who have no say in the running of the party. He also distrusts the president and his co-successor Mohamed Kahin for the clannish label “ foxiness”. Nevertheless, he can’t show his distrust intentionally. He heavily relies on his small clannish supporters to run the party on his behalf. If you check the social media campaigners and bloggers, their posts and you Google it, you easily find out they jumped on the party’s bandwagon when Muse Bihi won the candidacy immediately started writing for his advocacy. They weren’t Kumiyists before! For your information, I opposed the government when gone astray following clannish offer of jobs prior to Wadani party existence and still continue sticking to that position unless government rectifies its policies. I wonder, though, the social media clannish campaigners seem crazy and obsess with him, not the party as a party. most were fans of Jamal Ali Hussein the Harvard University guy who called him  ‘the learner’ but shifted to Soldier Muse for clannish affiliation, not ideology, yet fake hug with Mr. Jamal showing him fake smile. “madaxwayne waad heli kursiga”  but when he goes out, they speak in his back “ waar inan yaro  lacag la muudhmuudhay, waa shimbir ilaahay  u soo diray in uu  Masaarifsaddo Cali Guray iyo Faysal Warabe”. (he bails out Faysal and Ali for rent accommodation and living costs” . he is blessing in disguise for these broke men.

Muse, from his perspective, considers soldiers good at the bringing prosperity to poorer countries like Somaliland so the three soldiers at the top administration of his party isn’t by mistake—analysts argue otherwise. He brags of his soldierly demeanor of “Hoob jec”. He often challenges his holier-than-thou outlook and refutes it’s ‘the making of biased media’ from his hostile sub clans. When asked if he ever apologize his notorious remarks full of animosity towards his maternal uncles, he insisted on they were contextually right and rightly so to this day! He thinks to apologize and to adjust position as circumstance requires as a weakness or political cowardliness.

Any analysis of this boss suggests that he puts his views above anyone else, be it plain wrong or not, and that characteristic led his supporters to shift to Wadani party en mass. He’s lecturer, not a listener who thinks ‘others’ always conspire to rob ‘his’ party.

Muse Bihi is the face of Kulmiye party for years to come. He is defined by his image of 1994 “anigoo wax dili kara duco qaadan maayo” (capable of killing, I don’t need reconciliation “that statement as bad as it could be, summarized who Muse actually is: short-tempered, ill-natured,, rube in diplomacy whose childish reactions can trigger deadly civil wars in Somaliland if he comes to power. He’s good at being bossy honcho of near-to-death party where everyone else left except his sub-clan. There are parallels of Muse and Engineer Hashi’s election campaign in 1997 when Mr Hashi received two votes only out of hundreds of voters. The two voters, cousins of him, sympathized for his utter failure. Today, Muse relives in that reality where his henchmen entertain for him for allusions and far-fetched victory just to turn out in droves in his district Harshin, Ethiopia, and cast their votes. But what’s left of Kulmiye party? Will it survive next year? It can die at any time.