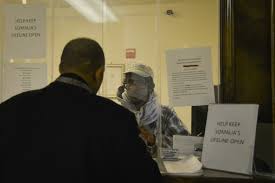 The Somali Hawala remittances’ closure may have a devastating humanitarian impact on Somali families,  as large parts of the continent’s population in African  are dependent on Hawala money from relatives and families living in USA and worldwide.

Somali families are panicking and businesses are running short of funds two weeks after the last major U.S. bank stopped transferring money to the fragile Horn of Africa country, development groups said.
Photo: Moe Jii works behind the counter of Dahabshiil, a money transfer company, in Falls Church, Va. The U.S. government and banks are shutting down cash