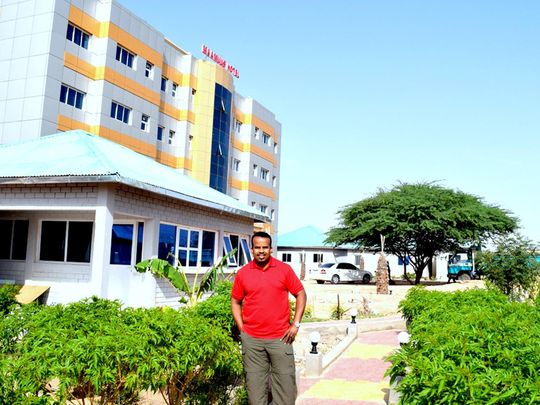 Hargeisa (HAN) September 19, 2015 – Public Diplomacy and Regional Travel & Tourism Initiative News. St. Cloud man’s hope renewed after visit to Somalia, By. IBRAHIM HIRSI, SPECIAL TO THE TIMES
For more than two decades, Ahmed Abdi has observed what seems like a race between major news organizations to tell a single narrative of his native Somalia: The story of death and destruction.

Abdi, who has lived in St. Cloud since 2003, returned this summer to the East African nation he escaped in 1991 after the brutal civil war that left his homeland in anarchy and chaos for more than 20 years.

The images Abdi saw during a two-month visit to various regions in Somalia weren’t those of terrorism, piracy or drought — stories that at times have blanketed America’s major newspapers and TV news segments.

Instead, he saw Somalia rising from the ashes of a prolonged civil war.

“There are new buildings erected everywhere in Somalia,” said Abdi, who returned to St. Cloud in August. “Some of the new buildings are worth $2 million.”

Some of those he met included entrepreneurs from Minnesota, doctors from Europe as well as educators and developers from Canada and other parts of the world — all of them wanting to help rebuild Somalia, which suffered in the hands of warlords and extremist groups for many years.

“Somalia is coming back,” said Dahir, a presidential candidate of the 2016 elections in Somalia. “But there is more to be done.”

Dahir plans to leave for Somalia early next year to focus on her campaign, hoping to make her mark in the male-dominated presidential field.

The once bullet-riddled Somalia is also attracting international investors, who are building airports, roads and seaports in the capital Mogadishu and other parts of the country.

Abdi, 44, said the world “abandoned” Somalia throughout the two decades that it was submerged in anarchy and turmoil. In recent years, though, the international community has changed its attitudes toward the country.

In 2013, for example, the United States recognized the Somali government for the first time since 1991. This recognition came a year after the Somali administration established a permanent government, ending eight years of transitional rule.

Even so, the new government is too weak to stabilize the country without the support of the African Union forces that have been stationed in strategic areas of Somalia to protect the government.

Abdi added that the world has realized the significance of helping bring stability to the region, which had been a stronghold for the Islamist militant al-Shabaab group — until about five years ago when the African Union troops expelled the group from major cities in the country.

Though the group’s fighters still manage to carry out sporadic attacks on government buildings and military bases, Abdi was quick to say that the fear of al-Shabaab hasn’t made a dent in the growing spirit of Somali residents.

“Somalia is changing for good,” said Abdi, a legal and medical interpreter who also produces Somali news videos for the St. Cloud Times. “I felt proud to see people coming back from the U.S. and Europe to make a difference.”

Airport arrival: A group of Somali people living in other parts of the world, mainly Europe and America, arrive at the Mogadishu Airport. (Photo: Photo by Ahmed Abdi)

The return of Minnesota Somalis to their native country isn’t a new phenomenon. Over the past six years, many Somalis have left to help rebuild their country.

The actual number of the returnees isn’t known, but many people — like Abdi Daisane, a senior student at St. Cloud State University — say members of their community are going back in waves.

“A lot of young people are going back,” Daisane said. “I myself was thinking, ‘When are you going to go back?’ Now I’m just watching the news. I want to go back and see (what’s happening there) with my own eyes.”

The return of many, however, is temporary. According to a 2014 study by the University of Minnesota, many Somalis from the diaspora stay in Somalia for about three years or less. Others usually return for a month or two — but on a regular basis.

The study highlighted several factors that contribute to their short duration in Somalia: security concerns, poor health care system and a lack of permanent jobs that pay well.

While some establish businesses there, the study said many who return to Somalia work for the government and for international nongovernmental organizations.

The study added: “Many of the opportunities that Somalis from the diaspora took advantage of once they were in Somalia … were temporary positions. Without more permanent employment opportunities, long-term or permanent stays were not an option for most.”

Still, Abdi urges the Somalis in the diaspora to play a role in rebuilding their country.

“I encourage them to be part of the change in Somalia,” he said. “They can work in government, health and education sectors.”

Photo: Ahmed Abdi is shown in front of Hotel Mansur in Hargaysa, Somalia. His uncle from Canada invited him to see the newly built hotel, which cost $2.5 million. Abdi’s uncle hopes to manage the hotel restaurant. (Photo: Photo by Ahmed Abdi)