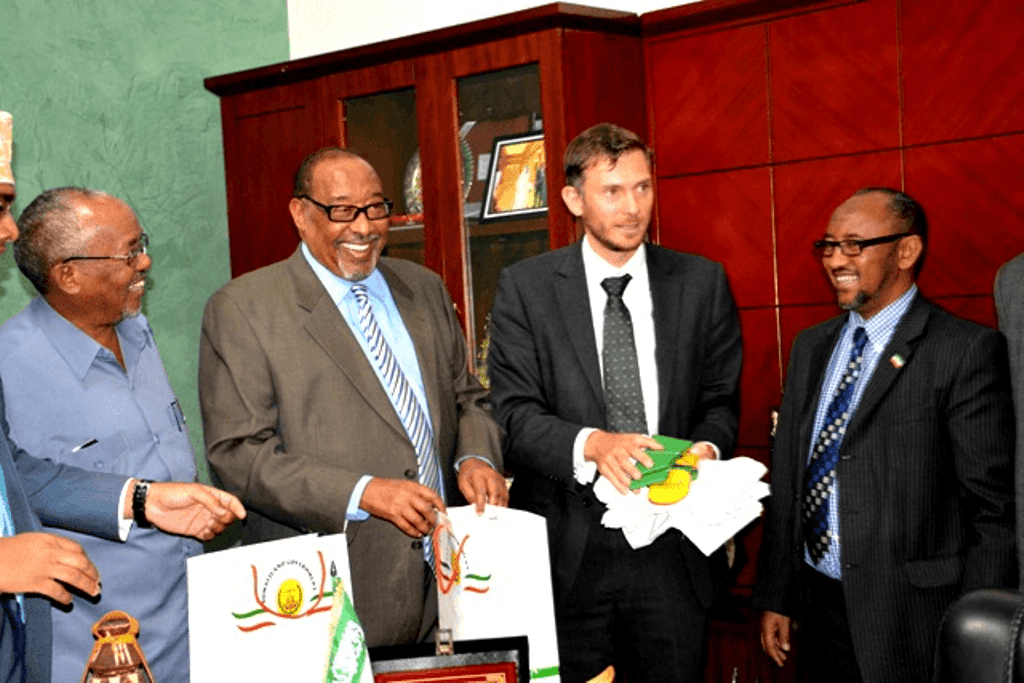 As part of its approach to global counter terrorism, the UK government, in partnership with the Somaliland government, established a Counter Terrorism Project at Hargeisa and Berbera Airports few years ago.

In a letter to Chris Allan of the British Embassy in Addis Ababa dated 15th November 2014, the minister pleaded for an additional period of four weeks for the parliament to pass the bill and promulgate the law by middle of December 2014.

Funded by the Foreign and Commonwealth Office (FCO), the project was subcontracted to Adam Smith Institute International to help Somaliland develop a counter terrorism capability.

The UK government supplied “security equipment and vehicles to the Somaliland Ministry of Civil Aviation and Air Transport to use at Berbera and Hargeisa Airports, and the Somaliland Department of Immigration to use at land, sea and air border crossings to ensure that persons entering and/or leaving Somaliland pass through robust security and immigration checks, allowing Somaliland authorities to identify and disrupt threats to aviation and border security”.

Gifted equipment include X-Ray, Explosive Trace Detection (ETD) machines and CCTV equipments and other materials. The cost of this equipment was estimated at well over a million US dollar.

In addition to this, training and mentoring was provided to ensure Somaliland airport security staff can operate these equipments as well as “to promote the benefits of a sustainable and compliant civil aviation sector.”

In essence, the idea was to help Somaliland Airport Authority to undertake counter terrorism activities locally in order to target the problem at source and, of course, by extension, help reduce ‘the risk of a terrorist attack against the UK.’

Sadly, since April 2014 until now, Hargeisa and Berbera airport security equipments particularly ETD machines remain non-functional. Yet, the minister had irresponsibly recruited 20 employees who have not been trained until now and cannot operate these machines safely.

Boxed and brand new ETD machines were simply discarded and left to rot in Hargeisa and Berbera airports. These are modern machines that Somaliland government cannot afford to buy and even if it were able to afford they are subject to stringent export controls in the UK and had to be assessed against the EU Consolidated Criteria before exporting to other countries.

Furthermore, the consumables of these machines had expired long ago and the Minister of Civil Aviation and Air Transport, Mohamoud Hashi Abdi, hates to be reminded of the importance of these machines for the safety and security of airline passengers. In fact he sees any talk of this as meddlesome political interference in his ministry.

Hashi fails to see the extreme importance of a homeland that is safe, secure and resilient against all forms of terrorism in this violence-ridden region of Africa. By behaving in this reckless manner, the safety and security of airline passengers are being deliberately compromised.

At a time the majority of Britons want to see the foreign aid and EU subsidies cut and Prime Minister of Britain, David Cameron, has admitted that billions of British aid money has been wasted, this minister seems to have knowingly painted Somaliland as another corrupt country that could not be trusted with aid money.

The UK government did not however abandon the project. It set aside another £2 million pounds (a little over 3 million US dollars) to help establish an independent Somaliland Civil Aviation Authority (SCAA) to be headed by an experienced director.

The aid was however conditional on Somaliland parliament passing a Civil Aviation Act to establish an autonomous authority with the objective of making aviation safe, regular, standard and efficient and also to equipping Somaliland airports with the necessary communications and navigational facilities in line with international standards.

The minister was meant to get the SCAA up and running by January 2014. The deadline to use the UK aid money has elapsed on 19th November 2014, in which case the whole project is deemed to have failed.

In a letter to Chris Allan of the British Embassy in Addis Ababa dated 15th November 2014, the minister pleaded for an additional period of four weeks for the parliament to pass the bill and promulgate the law by middle of December 2014.

Again, the four-week deadline that the minister has set for himself had passed and the 3 million UK aid money ring fenced for this initiative may have already been withdrawn by the FCO because of the minister’s gross incompetence and irresponsible delaying tactics. The minister blamed much of the delay on the parliament.

However, it has now come to light that the SCAA bill was deliberately hidden somewhere in the parliamentary archive and have repeatedly been obstructed by the minister with the help of several KULMIYE MPs close to him.  Until now, the bill has yet to see the light of day on the floor of the parliament.

Obviously, the minister believes that, by carving out of an autonomous authority from the ministry of civil aviation and air transport, his power will be seriously eroded by this initiative.

In June 2014, a delegation from ICAO met with representatives from the Ministry of Civil Aviation and Air Transport and assessed operations at airports in Hargeisa and Berbera. The minister told the visiting ICAO delegation that Somaliland was indeed ‘prepared to assume control of its airspace’ when, in actual fact, that was not the case.

Unsurprisingly, when Hashi failed to meet the deadline to set up the SCAA, the Federal Government of Somalia seized the opportunity and unilaterally signed an agreement with the International Civil Aviation Organization (ICAO) on December 4, 2014, attended by Somalia’s Minister of Air Transportation and Civil Aviation, Said Jama Mohamed (Qorshel) and Secretary General of ICAO Raymond Benjamin.

Clearly, the Somaliland aviation minister has not only short-changed the public in terms of safety and security of airline passengers but also deliberately sabotaged the establishment of autonomous Civil Aviation Authority and irresponsibly wasted much-needed gifted equipments, thereby portraying Somaliland in a completely negative light in the eyes of the international community.

But being a member of Ahmed Silanyo’s inner circle, don’t expect the president to give the minister even a pathetic slap on the wrist for his obstruction of the establishment of an autonomous SCAA.

The Ministry of Civil Aviation and Air Transport has literally become Hashi’s toy and no one can touch it.

Somaliland: An Open Letter to the President Siilaanyo Part II