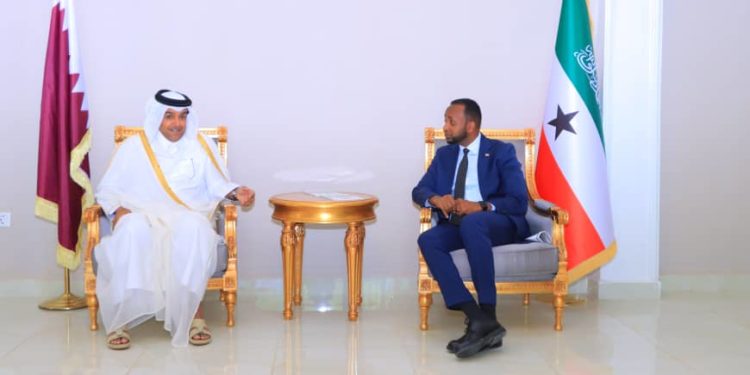 HARGEISA (HAN) May 1. 2021. Public Diplomacy and Regional Stability Initiatives News. Monitoring Regional Issues. Qatar’s Special Envoy Mutlaq bin Majed Al-Qahtani met with senior government officials in Somaliland Saturday ahead of a planned visit to Mogadishu amid reports that he will be seeking to intervene in the ongoing electoral stalemate.

Al-Qahtani held talks with Somaliland’s Deputy Foreign Liban Yusuf. The arrival of the envoy comes ahead of the deployment of an African Union special envoy to Somalia to spearhead mediation between the opposition and the Federal Government.

The African Union Peace and Security Council announced last week it will be dispatching a special envoy to Somalia. The Council unequivocally condemned the extension of Mohamed Farmaajo’s stay in office.

The UN and key western donors have welcomed the appointment of a special envoy and expressed support.

Analysts have however warned the arrival of the Qatari envoy is part of Villa Somalia’s machinations to frustrate the AU envoy’s efforts. Qatar which played a key role in Farmaajo’s election in 2017 has been variously accused of stocking unrest in Somalia and channelling funds to support Farmaajo’s efforts in destabiling Federal Member States.

Farmaajo is today addressing the Lower House where he is expected to seek the nullification of the April 12 unilateral resolution that sought to add him two more years in office.