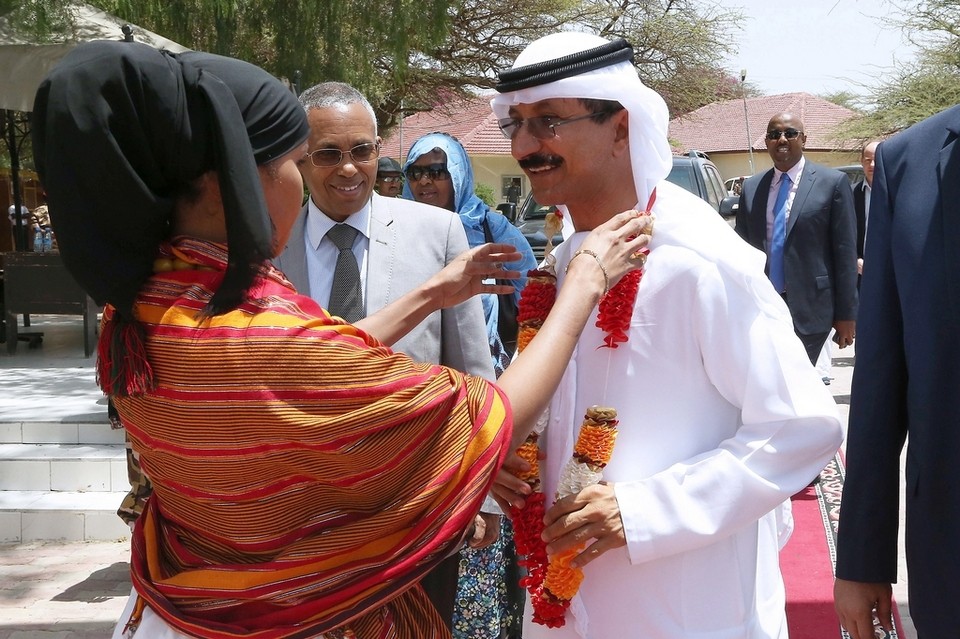 BERBERA (HAN) May 28.2016. Public Diplomacy & Regional Security News. BY: Awad Mustafa. The ports operator DP World is bullish on Africa and will expand further across the continent following a deal to create a new gateway in Somaliland, on its eastern coast.

“I am very bullish about Africa and I believe it still has a very huge potential,” the DP World chairman Sultan bin Sulayem told The Nationalduring his first trip to Somaliland last week.

“The reason why we go to Africa is because we get a lot of knowledge and experience and they are the two factors for success.”

This month DP World signed a US$442 million agreement with the government of Somaliland to develop and operate a regional trade and logistics hub at the Port of Berbera.

The project, which will be phased in, will also involve the setting up of a free zone.

The agreement comes as part of a larger government-to-government memorandum of understanding between the Dubai and the government of the Republic of Somaliland to further strengthen their strategic ties.

The minister of foreign affairs and international cooperation of Somaliland Saad Ali Shire, said that the agreement is scheduled to finalise by July.

“This agreement is opening a new chapter to gaining foreign investment by Somaliland. This deal should enhance job opportunities to youth of the country,” said the minister.

In the past three to five years, the company said, DP World has spent over $1 billion in capex and added 2,275,000 twenty foot equivalent units (TEU) of capacity at its terminals in Africa, bringing the total annual capacity to 6.2 million TEU.

Berbera port would be the eighth DP world operation in Africa when completed.

According to Mr bin Sulayem, Berbera port will become a hub and sea route for the Ethiopian market primarily, which is one of the world’s fastest-growing economies and is in need of improved infrastructure and facilities to keep up with the rate of expansion.

“I requested a meeting last year with the prime minister of Ethiopia because they had made an announcement for big expansion plans,” Mr bin Sulayem said. “When I met him he explained to me that they are a large population, they are underdeveloped and they have started a development programme to improve the lives of their people.”

Investment in this natural deepwater port will attract more shipping lines to east Africa and its modernisation will act as a catalyst for the growth of the country and the region’s economy, Mr bin Sulayem said.

He said that scaling up operations in Berbera port will not only complement DP World’s services in the Doraleh terminal in Djibouti – a key facility for regional trade – but also support growth at its flagship Jebel Ali port in Dubai.

Last year, Ethiopia’s economy expanded by 10.2 per cent, but is now set to slow to a rate of 4.5 per cent this year because of the impact of drought. However, the outlook for Ethiopia’s economic growth for the next four to five years is favourable, with expansion averaging above 7 per cent, according to IMF forecasts. “Growth in Ethiopia has been underpinned by investment in infrastructure,” Natznet Tesfay, the director of Africa Analysis at London-based IHS told The National.

“Once the port is working at a 75 per cent efficiency, the remaining $170m will be invested in to the development of the port quay,” Mr Omar said.

The port historically served as a naval and missile base for the Somali central government, and in the 1970s it was developed and managed by the Soviets before being turned over in the 1980s for US military use.

The port has been a major link for Somalia and the Horn of Africa to the world, according to the Berbera port general manager Ali Mohammed Omar.

“In 1992 there was a famine in Somalia when the Berbera port was shut down because of the war. That’s why the starvation and famine was very strong and killed many people. It is a key port to us,” he said.

A railway line between Djibouti and Ethiopia was launched at the end of 2015, establishing a key transport infrastructure line and better access.

The government-to-government agreement includes building a road between Berbera port and the city of Wachaale, on the Ethiopian border, dedicated to transport shipments directly from Berbera to the Ethiopian market, Mr Bashe Omar said.

While DP World will be involved in the port and free zone projects, agencies within the UAE Government will handle the road construction, Mr bin Sulayem explained.

“We will seek their help because Somaliland is eligible for foreign aid from the UAE,” he said.

“Today there are 500 trucks leaving every day from the port on to the road. If you take an average of 400 trucks a day in one year that’s 146,000 trucks leaving the port and if you add trucks coming in to the port, that’s almost 300,000 going in and out so definitely the road will add a lot of value,” he added.

The Ethiopian government is now developing Diridhaba, a new logistics and industrial hub in the north-eastern quadrant of the country.

This could represent a new opportunity for DP World, says Mr bin Sulayem.

“Diridhaba is big and the government has plans, we are hoping that we will be allocated a space for our logistics park an industrial zone there.”