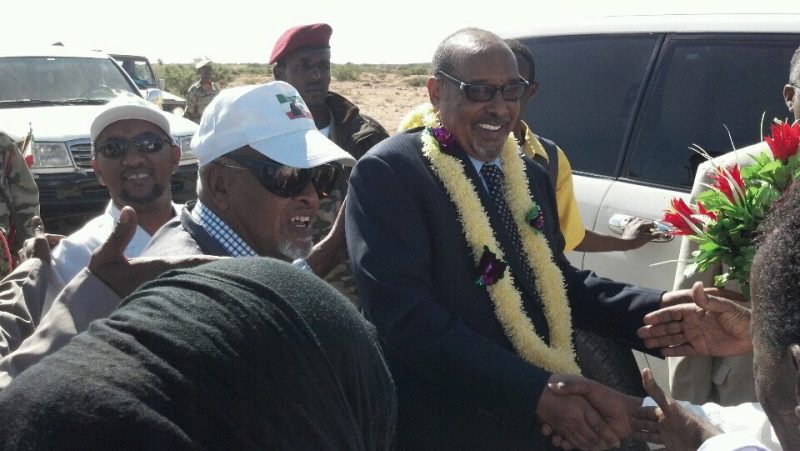 The tension of the political dispute emerged after Silanyo sacked unexpectedly Commerce Minister Mohamed Abdulahi Omar by presidential decree-a move related to wrangle over the next candidate for Somaliland presidency.

Public outcry emerged inside members and supporters of Somaliland Ruling party of Kulmiye have taken to streets across Somaliland, chanting opposing slogans in support of Kulmiye factions.
The Somaliland House of Elders Speaker, Suleiman Mohamud Adam Known us, Soulaiman Gaal) who flew from the UK in Monday has announced the appointment of 15 members of committee from the house of elders who are given the overall responsibility to start mediatory efforts to end the current political impasse and wrangle that is faced with the ruling Kulmiye party.

There are currently two factions that the Peace, Unity and Development Party has split and the two rivals are led by the chairman Mr. Musa Bihi Abdi and the president Silanyo who are disagreed over who will be the genuine flag bearer of the party.

It has not been officially revealed when the committee will get down to business but there are other groups that are shuttling the two factions to end their differences peacefully.

The appointed Somaliland Elders committees are:

The faction led by the vice president Abdirahman Abdilahi which held meeting at Mansoor hotel on Monday officially announced that the executive committee will get together on the 1st June. What they announced is that the only figure who will stand for the party candidacy is the incumbent president Ahmed Silanyo.

Reports that SomalilandInformer.Com has learnt that all government media outlets was informed not to disseminate press releases or not to broadcast the press conferences held by the faction headed by Musa Bihi.

The sacking of the Minister of Commerce by Silanyo was seen as move to clear all figures that showed support for Musa Bihi from the government.

When all is said and done, the party is faced with serious disagreement that may sink the country into state of anarchy unless the situation is prevented with all means.

The salvation of the party which now at loggerheads is the duty of all Somaliland citizens to voice their concern and speak with loud and big voice that the troublemakers within the party must be recognized.

He is the head of state that everyone can take heed of his speech and must stop ruling the party wrangle behind the curtains.

What the two be it Musa and Silanyo agreed are not known but the two is must to honour their pledges and promises.

The faction led by Musa has on Tuesday announced that the party executive committee will get together on the 31st of May which has already fuelled the fire and made the situation to get worse.