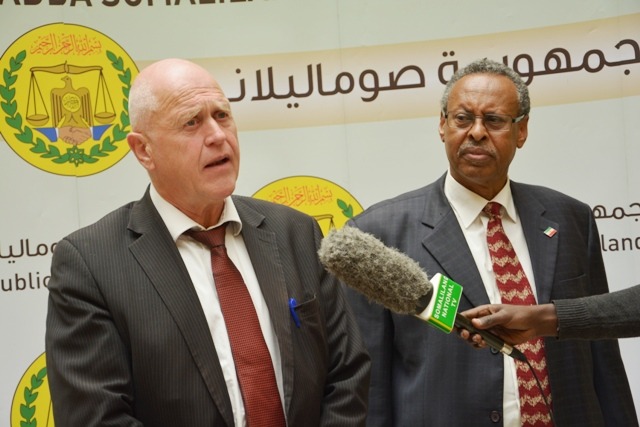 Hargeisa (HAN) September 24, 2014 – Public diplomacy and National security news. President Ahmed Silanyo received at the presidential palace Norway’s Special Envoy to Somalia Mr. Jens Mjaugel who arrived in the country on official working visit to Hargeisa. During the meeting they exchanged views on number of issues ranging from Norway providing assistance to Somaliland’s oil exploration projects, exploiting marine and fishery resources and moderating the ongoing dialogue between Somalia and Somaliland talks. Somaliland’s Foreign Minister Mohamed Bihi Yonis has announced that Norway will assist in the fight against regional piracy projects in the Horn.

Norwegian special envoy said last month, “Somali central government does not work. Mogadishu is the only capital which does not issue birth or death certificates. It says everything that the country is not working, says Jens Mjaugedal to Bistandsaktuelt.  After numerous peace conferences and initiatives marked the election of a new president and the federal government a distinction in 2012. It made an immediate impact with a greater degree of political recognition internationally, with a number of high-profile policy initiatives. It was painted a picture of a political stabilization and a possible reconstruction of the country.”

Norway’s special envoy to Somalia believes the authorities in Mogadishu have failed to take the lead in the political process in the last two years.

All national institutions, the entire bureaucracy was and is still broken. If you look from 2012 to the present day, they have regional tensions only increased, says Mjaugedal.