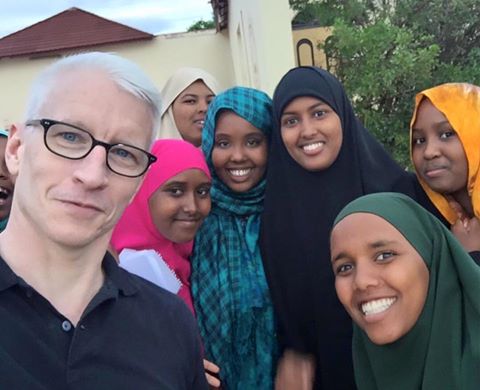 HARGEISA (HAN) May 2. 2016. Public Diplomacy & Regional Security News. Anderson Cooper From CNN on assignment document the success Somali students being accepted to Ivy League schools in America. Over 60 students have been accepted to international universities all over the world since it opened in 2009.

Anderson Cooper visited Somaliland’s Abaarso School of Science and Technology this week was amazed at what he has seen. The school is a success story in a part of the world where war and terror is all over the news. Abaarso might have figured out a wining formula to get students into the top American schools like Harvard, MIT Carnegie Mellon.

It has been over 2 decades since the Republic of Somalia collapsed, and it has been ranked the world’s #1 failed state for 5 consecutive years. Generations have grown up only knowing a war-torn society, and the impact of the problem has been felt all around the world through piracy and terrorism. The only way this will improve is by making a lasting change to the reality on the ground.

Been on assignment in #Somaliland. Thanks for all the love about #NothingLeftUnsaid and #TheRainbowComesAndGoes pic.twitter.com/CUwieYjAVQ