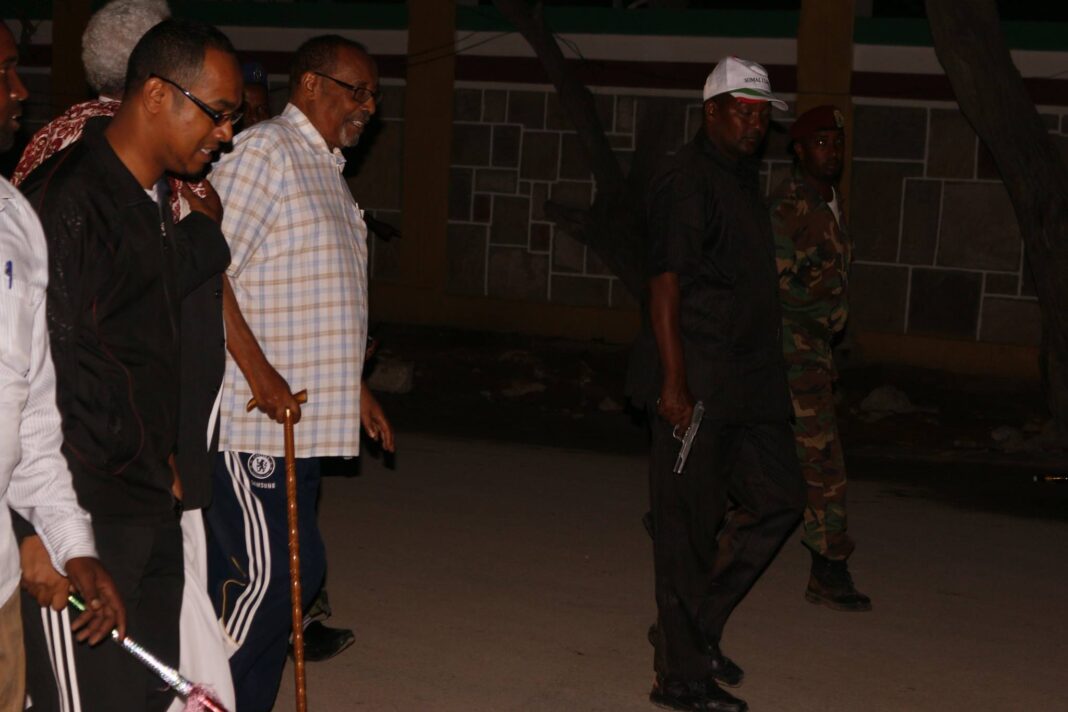 Nairobi (HAN) May 18, 2014. Updated Diplomatic News.  In order to maintain peace and to facilitate development in the region, it is better to accept the reality on the ground. Somaliland is here to stay, according to the  Foreign Affairs minister  of Somaliland,  Hon Mohamed Bihi Younis.  Somaliland is a inclusive, democratic and stable country. Somalilanders from all communities desire to determine their own destiny.  The greater Somalia dream never came to fruition. The union failed, at a terrible price and Somaliland restored its sovereignty. Somaliland has all the attributes of a modern state; defined borders, settled population and functioning state institutions.

The region touts itself as democratic and has keenly participated in Western anti-piracy efforts. But it has failed to win much support for an independence bid. That has made delving into the politics of oil more attractive, with the elite hoping to gain financial stature and friends. Photo: Somaliland president strolling around the main streets of  Hargeisa to show  peace and stability of Somaliland.

Jamal Ali Hussein, the presidential candidate for the opposition Justice and Welfare Party and former CEO of Citibank in Tanzania, says that the nation is banking on oil as a cornerstone for development. At least a dozen blocks are apparently available for exploration soon. Therefore, because of Somaliland Geo-strategic and stability, the Kenya current government is set to open a diplomatic liaison office in Hargeisa, the capital of  Somaliland.

According to Geeska Afrika Online diplomatic Reporter and IGAD2020 Regional Security Watch, ‘ it is one of the positive diplomatic initiative, initiated  by The minister of foreign affairs and international cooperation Mohamed Bihi Younis.’

The diplomatic move comes as the peaceful former state in the troubled Federal Republic of Somalia celebrates the 23rd anniversary since it established itself as an autonomy.

Foreign Affairs Principal Secretary Dr Kibicho Karanja, while confirming that Nairobi has authorised the opening of a liaison office for Somaliland State in Kenya, said on Saturday that Kenya would also open a liaison office in Hargeisa.

“It is true that we are opening a liaison office in Hargeisa and we have allowed Somaliland to open theirs in Nairobi. This however does not amount to a diplomatic consulate,” Dr Kibicho said.

He said that the opening of the liaison offices is meant to bring services closer to the people.

Somalia is said to have protested the move to allow Somaliland to open a liaison office in Nairobi, worried that it could trigger a future diplomatic ties with Kenya given the stability in the former federal region of Somali with a population of about three million people.

But Dr Kibicho allayed fears that the move could trigger diplomatic tension between Kenya and Somalia.

“The Federal Government of Somalia is well briefed on the initiative as Kenya only recognises the existence of one government in Somalia,” Dr Kibicho said.

“There is no dispute about our decision to open the liaison office in Hargeisa we have discussed this matter with federal government authorities,” said the PS.

Somaliland, which has claimed autonomy from the main Somalia government, is on a mission to initiate relationships with regional states as it prepares to campaign for recognition at the African Union and the United Nations.

President Ahmed Mohammed Silaanyo was elected into office in 2010 and is Sunday expected to lead the State in celebrating the 23rd anniversary since its reestablishment.

Dr Mohammed Jama, a Somaliland diplomat appointed by President Silaanyo to represent Hargeisa in Nairobi said that Kenya’s request to set up an office to coordinate its activities in Somaliland has been accepted.

“The whole world now knows that Somaliland is a stable state and we are keen to move forward and to relate with regional countries like Kenya. We are glad we have been allowed to open an office in Nairobi which I head,”Dr Jamaa said.

He said many Kenyans are now working in Somaliland, with about three Kenyan universities now operating in Hargeisa city.

“We are keen on mutual ties with Kenya because this will be mutually beneficial to citizens of both the Somaliland and Republic and Kenya,” he said.