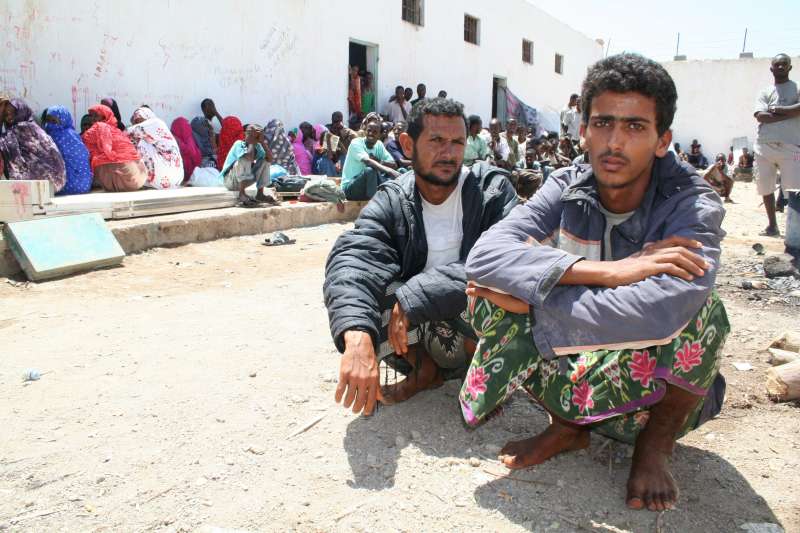 Share on Facebook
Tweet on Twitter
Hargeisa.BY:Matthew Abbey. As the war in Yemen continues to produce more and more refugees, it is Somaliland, along with Djibouti, that continue to bear the brunt of the exodus.
A coalition lead by Saudi Arabia, with support from the United States and other Western nations, have conducted airstrikes targeting the Houthi rebels who swept across the fragile state in March 2015. As usual, it is the civilians who are getting caught up in the crisis. Many Yemenis have fled across the Gulf of Aden seeking relative safety, but they aren’t the only ones turning up on the shores of Africa.
For years, Somalians have migrated across the Gulf to find work in Yemen and further afield in Saudi Arabia. Somalians are considered a cheap source of labour in the region, working in haphazard conditions while sending remittances home to family members.
But now as war leaves no option of remaining, many Somalians have boarded derelict boats bringing them to the coastal town of Berbera on Somaliland’s coast. The international community does not recognise the Republic of Somaliland as an independent state, instead considering it part of Somalia and thus under control of the capital city, Mogadishu. As such, under the rules of the United Nations High Commission for Refugees (UNHCR), Somalians, or Yemenis with Somali origins, fleeing the war are not considered refugees upon arrival in Somaliland. Instead, they are considered returnees and fail to be afforded the safeguards that refugee status provides.
To complicate their situation further, Somaliland does not recognise the many Somalians arriving by boat as returnees, due to their plight for independence. According to Hargeisa, the Somalians are refugees.
Seeking economic security in Yemen and now physically safety in Somaliland, Somalian refugees have been left out in the cold.
Somaliland has long sought independence from war-torn Somalia. The territory has morphed into a de-facto state, not so dissimilar to the Iraqi-Kurds, that stands out as a beacon of safety in the region. The few attacks committed by terrorists from Mogadishu on Somaliland soil have only incentivised the government to increase expenditure on security and border control. Any further attacks within its borders will undermine its bid for independence.
The international community, however, fears a ‘Balkanisation’ of the region if it were to recognise Somaliland independence. Neighbouring regions Puntland and the Ethiopian Somali Regional State are home to a wider Somali population. Any support for Somaliland independence risks arousing similar demands elsewhere. It also destroys any vestige of hope for a stable region.
It is ultimately the Somalians fleeing Yemen who suffer the most as a consequence. Somaliland remains reluctant to provide any support, believing Somalians to be refugees and therefore under the responsibility of the UNHCR. If Somaliland were to treat them as returnees, its bid for independence would be irreversibly damaged through indicating acceptance of Mogadishu’s sovereignty over the territory. In the long run, arguing the Somalians are refugees may prove beneficial in order to highlight Somaliland’s serious intention of being recognised as a state in its own right. As a result, however, the Somalians fleeing Yemen are stuck between Somaliland’s bid for independence and a UNHCR mandate, receiving little assistance from either side.”
Matthew Abbey. Australian freelance journalist currently reporting from the Horn of Africa