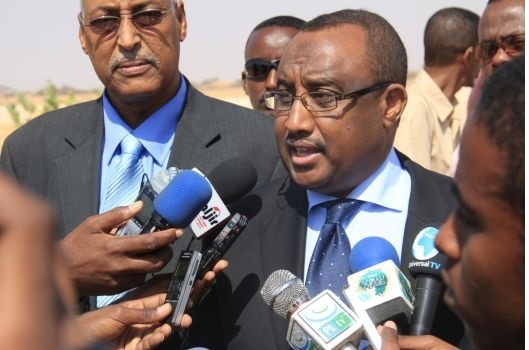 Hargeisa (HAN) March 27, 2014 – Abdiwali Ali Gaas is one of the few lucky Somali students who studied at the elite Schools in the North America with the taxpayers of poor Somalia, no doubt Mr. Gaas is well credentialed and needless to say he attended in x or y university. And it is true many people both in the pirate land and the diaspora said ” wow, wow, the Harvard trained economist arrived in to turn bitter ocean into honey and pirates into professional economists …” expecting him to apply his major field to Puntland’s socioeconomic hardship when he declared his candidacy to his Pirate land, the favorite place of Hollywood’s recent Pirate film’s shooting occurred. However; his acts are not matched to his acquired knowledge if he acquired any during his roaming in the West— yes he was roaming, not touring—. Ever since his assumption of power from his predecessor, a pacifist leader who hates bloodshed, he avowed to wage war against imaginary enemy , not Somaliland at the least because they are not foe but his fellow people. Like much his bloodthirsty uncle Siyad Barre who used to insist on annexing Ethiopia’s Somali territory to his imaginary “Daarood land” despite OAU several verdicts that Western-Somalia is undoubtedly Ethiopian land by any international law (Somali National Regional State), not Daarood land as they like to call it , Mr. Gaas announced after his narrow win in “mockery” elections held cramped hall in Garoowe to return his fancy Jerusalem, namely tiny village of Badhan and Las Qoray, dilapidated old port town and turn Somaliland’s eastern regions into a bloodbath! Why is he intending to fight ferociously over 3 kilometers of barren land of which its inhabitants are struggling to feed their households despite double if not multiple assistances from Hargiesa and Mogadishu.

Many of his close friends back in the State think that his love of his dispersed ethnic over three different countries stayed with him in spite of his overdue stay in the free world where people belong to social ” class’ and “ascribed status” unlike Somalia where you stay untouchable outcaste “Midgaan” even if you worked hard and became successful.

So to show his deep passion of unitary inclinations to create Greater Daarood Pirate land, he included a man from NFD of Kenya, another from Somali region of Ethiopia, and others from Somaliland into his cabinet heavily influenced by the pirate money. It is first time Pirate-infested region of Somalia have acted recklessly. But he was forewarned much like his late uncle Siyad Barre not to adventure and walk into deadly war with Ethiopia. I think both fell to deaf ears. I hate to say this but it is true: they don’t learn anything from their past mistake.

Abdirahman Faroole was a rational man who avoid to utter inflammatory language despite aggressions sometimes from Somaliland camp. He was a visionary man unlike this little man who want to accelerate the death of Pirate land of war, and that is a positive thing to many Somalilanders—they want failed Somalia as one camp not many tiny invisible entities speaking over the other – instead of gradual natural demise.

But how does his education from JKF School and his PHD square to his tribal mentality? Nonetheless; Somalia where the government scholarship based on ethnicity than a merit, any fool can go to top notch schools in the West. And come back.

What are possible scenarios if the war declared by Mr. Gaas to pour his gas into it and set Somalia afire? Does he know the consequences? Does he know Al-Shabab which are on run are looking for Gal-Gala hideouts very similar Tora Bora of Afghanistan? Does he know his shaky clannish entity financed by piracy revenues would soon disappear if all-out war erupts in this mountainous region of Eastern Sanaag whereby giving an opportunity to militants to breed and establish their much wanted caliphate? His decision to wage meaningless war is said to born out of his personal paranoia that his “tribal” borders are always under attack from all sides and his “vanquished” folks whose remnants are chased out of Mogadishu and Hargiesa all the way to Kenya’s borders and are still victimized by major clans of Somalia. The people in Pirate land are good ones, they just resorted to piracy business to survive their when they are sandwiched between Hargiesa and Mogadishu and economy reversed to Stone Age era; they expected him to de-poison the piracy based economy by growing more frankincense in semi-desert territory rather than compounding it.

His life in downward trend: his name went viral when he assumed premiership of Somalia, but unfortunately his status has been in decline from Premier of Failed Somalia to Chief of Cabinet of Pirate Land probably CEO to pirate cartels in the future unless he returns to world of reality. Imagine this guy without going to Harvard. What kind of person would be? In his own figment of imagination, he is sandwiched between two arch foes and so he is waging survival wars at the two fronts at Galgalga’ayo and Las Qoray. Let us see to where he leads his pirate land.

Opinion Contributed to Geeska Afrika Magazine Online By Abdirahman Mohamed Dirye, Somaliland Schooler.
The Note Sources expressed in this article do not necessarily represent the views of Geeska Afrika Online, HAN, Editorial Board, www.geeskaafrika.com or our global writers and reporters. The views are solely that of the source. Your Comments:  Contact at han@geeskaafrika.com