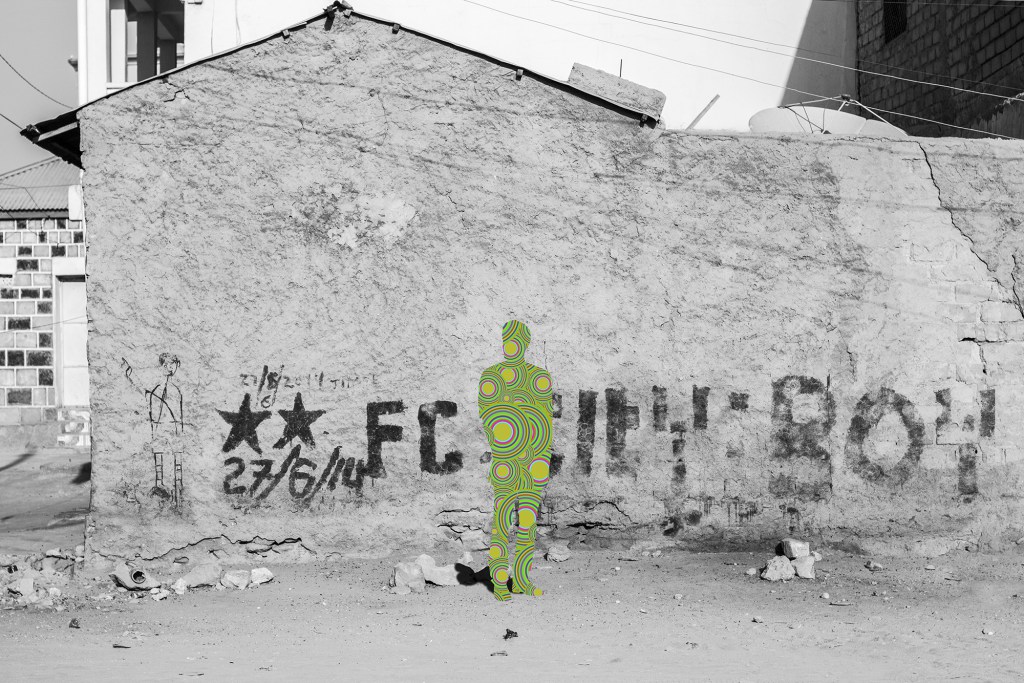 Mustafa Saeed is a photographer and graphic/sound artist living in Hargeisa, the second largest city in Somalia and capital of the self-declared independent Somaliland. His work, mixing different media, looks at war, conflict and the surrounding environment. In Cornered Energies, a series of visuals and short interviews, he explores the issue of youth self-expression in a place where shared spaces for expression are lacking.

“I never had the freedom of self-expression, never knew how to speak about myself or things I like, whether in school or outside of school. Ours is a culture that looks at self-expression as a weakness. As an adult, I always have second thoughts about any work that I’m doing and the way it will be perceived; non-logical fears, me cornering myself. This project is about the non-existence of platforms for young people in Somaliland/Somalia and their lack of self-expression. The way their energy is wasted. I met youth from different backgrounds and photographed them in spaces where they spend their daily lives, asking them to express their thoughts about being ‘cornered energies’.”

Your work is about the lack of self-expression and opportunities for Somali youth. What are your experiences of that?

When I was a teenager there were not so many things to do. Lots of youth fell under the usage of khat, spending most of their time in tea or coffee shops. Much energy and many ideas were wasted, not only time.

I always tried to run away from that dark well of doing nothing. I would try to organise parties with friends, designing and selling tickets and taking photos, or creating music mixes and seeing people dance to them. But today, after all this time, it is still the same. There are no platforms or spaces where youth can express themselves, or participate in any activities or programs.

How did you discover art as a means of expression?

I always loved magazines and booklets from music albums. But it started after I discovered social media. I found myself sharing photos, starting online campaigns and a Facebook group telling people to share their out-and-about activities or the beauty of our city. After that I found graphic design as an art form, outside of the field of advertisement, and I began doing photo collages and digital art.

What kind of future would you like to see for young people in Somaliland/Somalia?

I would like to see opportunities, spaces, things to go back for. Because now, we all move when we don’t find what we are looking for – be it a job or an experience or something else. Satisfaction will keep young people expressing their energy and benefit from that.

I have had a hard time sometimes reaching out to people with this project, telling them to express themselves in words or sounds. I still want to reach many more people and hear what they have to say, how they see themselves in their city and its surroundings.

Tell us about the choice to use black and white and multi-coloured figures.

We are all occupying different spaces; they may look the same or different but we are all filling them with soul and motion. It can be the home, the office, the school or a park; it wasn’t important to highlight the physical space but to emphasise the body, which is filled with motions and emotions and is the physicality of each person’s actions. I wanted to imagine all energies that fill us as neon-coloured things.

Are there any Somali traditions or heritage that can be used to build new platforms for youth self-expression?

Poetry is one of the oldest forms of expression in Somali culture and history. Somalis are people of an oral society, which is continuously being revived with new attempts in different styles and on different subjects. The younger generation is picking from that in a very good way.

Finally, you are planning to soon have a solo exhibit in Hargeisa?

I am planning for an interactive installation, with boxes containing written letters from people expressing themselves, talking about anything. Whether they were being “cornered energies” or not. I will be collecting anonymous letters at the exhibition, and archive them to later be used for the project.

These are portraits of youth in Hargeisa, photographed and interviewed by Mustafa Saeed.

“It seems that our ancient culture was more open than the one we have now. Youth today are not given any responsibilities and are treated like they are nothing.”

“We are cornered within our own fears, in small, virtual spaces. I feel that we are our own prisons. Youth in youth prisons. I have the courage to do things, but there are still unreasonable thoughts keeping me behind, stopping me from taking steps forward.”

“I always thought the only thing that could hinder creativity is a dictatorship. But now i realised that dictatorship culture can also do the same thing. I am living in a society with many diseases, like clannism, corruption and injustice. if you have a different opinion or a different dress, they do not see the positive side but they call you an alien. For that reason, I am an alien with my own people in my own country.”

“I can break it, whatever it is that is standing in front of me. I am breaking it now, expressing myself. I feel it is easy and it always was.”

“I am in a country where i can’t express what I want. There are lots of challenges, whether coming from family culture or people you live with. This has made me confused and thinking if I am a youth or older than my real age.”

“The disuse of my body has two causes: as a migrant, I don’t have a passport to get out of my de facto prison, and I have no musical education to nourish my talent. If I had these two I would be singing to every element of nature in every city in the world.”

“I told my two year old niece, ‘It is shameful, don’t scream, you’re a girl.’ I still regret it, myself I cannot answer the simplest question like, ‘How are you?’ because I am not used to expressing myself since I am a girl.”

“Help (youth) when they need your hand, not when they have reached their goals and do not need anything from anyone.”