Home frontpage Somalia:Uniting all opposition for collective political action for 2016 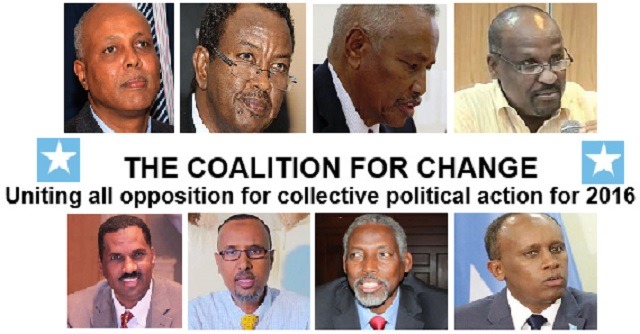 THE COALITION FOR CHANGE: Uniting all opposition for collective political action for 2016. The Coalition for Change is a platform for political parties, forums, presidential candidates and politicians who have collectively consented to coordinate their activities in order to bring about a positive political transformation in Somalia leading up to the 2016 legislative and presidential elections.

We have followed the developments surrounding the 2016 electoral process closely, and are deeply concerned by the positions and actions taken by the National Leadership Forum as articulated in the NLF’s Communique of 9 August 2016. In response to the NLF’s Communique, we collectively express the following:

(1) The Coalition condemns in the strongest terms the National Leadership Forum’s disregard for the rule of law and the respect for and sanctity of the Somali constitution in extending the term of the executive office holders beyond the mandated term. This extension is an utter violation of Article 91 of the Provisional Constitution that mandates the President of the Federal Republic’s term not exceed the allotted four (4) years. As per Article 91, the mandate of the incumbent President’s term should cease on 10 September 2016.

(4) The Coalition takes issue with exorbitant fees for registration of candidates running for parliamentary seats (i.e., US$ 5,000 to contest for a Lower House seat and US$ 10,000 for an Upper House seat). This can result in the harmful effect of monetizing electoral politics in our country, linking wealth with the electability of parliamentary candidates. The establishment of such candidate eligibility criteria violates the political rights of citizens from all walks of life to contest in parliamentary elections, and does not provide an equal playing field for all aspiring candidates. Moreover, given Somalia’s recent electoral history, the decision to institute a financial criterion to determine who could stand as a candidate can serve to further entrench a political culture that normalizes corrupt forms of electioneering in the form of exchanging vote-buying for financially securing parliamentary seats.

(5) The Coalition is gravely fearful of the consequences of a rigged electoral process and the potential for inflaming violence in electoral constituencies that may lead to the resurgence of conflict in and between communities throughout Somalia.

(6) The Coalition expresses deep concern for the security of clan elders and aspiring parliamentary and presidential candidates, as their safety may be in jeopardy from the twin problems of insecurity and election-related violence that may stem from a hasty and poorly managed electoral process.

The Coalition, therefore, calls for:

A constitutional handover of the Presidency of the Somali Federal Republic to the Speaker of the Parliament with immediate effect by the 10th of September, 2016, as per Article 95 of the Somali Provisional Constitution.

Stringent security measures be put in place to ensure the safety of traditional elders, parliamentary and presidential hopefuls, politicians, civil servants and citizens.

A review and amendment of parliamentary candidate eligibility requirements so as to allow all aspiring Somalis to run for Parliament on an equal footing.

All political leaders in opposition to join their forces together to enact positive change required to reverse the failed leadership of the incumbent administration that has broken its compact with the Somali people and flouted its constitutionally mandated responsibilities.

Finally, the Coalition will articulate its recommendations for a fair, transparent, and smooth 2016 election process. These recommendations will be shared with all relevant stakeholders, most importantly, the Somali public.

Members of the Coalition for Change

Hon. Ali Haji Warsame, Chairman of the National Forum for Justice and Development (NFJD) and former 2014 Presidential Candidate of Puntland.