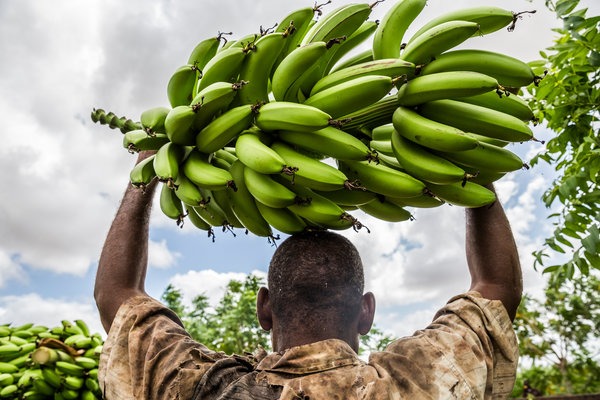 Mogadishu (HAN) MAY 10,2015 Regional Investment and security News. Farak Doudi, 56, swings a rifle and cleans a water canal that washes into his banana fruit plantation. He marvels at the yellow banana trunks that sag over the waterway. At the same time he is jittery – sneaky bandits might raid his crop and ruin his income or even worse plunder his life. This is Shabelle region – the country’s southern province known as Somalia’s “food basket.” In this region much of Somalia’s farming is concentrated because water from the Shabelle and Hubba rivers provides irrigation even when the rains fail. Here, in a country that once rumbled on for 18 years without a government, farmers like Farak are leading an astonishing recovery for Somalia’s agriculture.

Before the country’s slide into lawlessness in 1991, when the president Mohammed Said Barre was deposed, Somalia was famous for its drought resistant goats, camels, sheep, bananas, sorghum and corn. At the time, Somalia was the largest banana exporter in all of east East Africa. Its greatest output was 110 tons in 1990 just before the onset of war. Its fruit was fancied for its sugary taste in the key markets of Europe, Kuwait, and United Arab Emirates. Even today after much mayhem Somali is the world’s largest producer of frankincense plant. Today in 2015, relative calm has returned. Al Qaeda linked insurgents have been neutralized, ocean pirates have been stamped out and United Nations backed government controls much of the country. The Somalia Central Bank is leading the way, distributing loans, tractors and land ownership certificates to committed farmers like Farak.

Before the war’s onset all of the country’s land was nationalised. Now, financial remittances from Somalis working in Dubai, Europe and America swell up to $1,2 billion per year, support 41% of the population and oil the country’s vital agriculture sector. Even traditional donors like Kuwait and Dubai are coming on board, constructing ports to export Somalia’s oranges, plums, groundnuts and camels. Once again the main cash crop, bananas, are thriving. Somalian agriculture on its own has distinct natural advantages. Somalia’s main export port of Mogadishu is close, just a five hour flight to the Arabian Gulf, whichi is one of the world’s most lucrative agriculture markets. Only 1.6% of the country is farmed. The other 69% is reserved for pasture. It’s not surprising that livestock farming makes up 40% of Somalia’s gross domestic income and 50% of its yearly exports.

Even the fearsome Al Shabaab Islamist militia has in some way positively impacted on this impressive resurgence of Somalia’s agriculture. In 2011, Al Shabaab militias expelled foreign aid groups in the breadbasket Shabelle province of south Somalia. Foreign aid groups brought food from outside instead of purchasing the produce of local farmers, moaned the militias. In south and central Somalia where they once ruled the militias dug deeper and wider water canals that turned a dry province into a lush green belt of rice and banana fields. Local restaurant owners who cooked local produce were at once exempted from the militia’s punitive taxes. “We want our people to be free of NGO and foreign hands. We want them to depend on each other and stand free of outsiders, “ said Abu Abdullah who was the militia’s head Lower Shabelle region in comments to Al Jazeera at the time.

Initially the militia’s actions were condemned as cruel for a province that was the epicenter of Somalia’s 2011 famine. But the results are startling today in 2015. Coupled with help from the European Union and funds from Austria, farmers in Somalia’s produced 200,000 metric tons of high quality grade in March 2014. For the first time Somali farmers were able to sell grain directly to the United Nations World Food Program after receiving training on how to handle ,grade, and warehouse their harvests. “It’s a joyous feeling,” says Farak. This is impressive because famine blighted Somalia in 2011, overwhelming four million citizens and killing 260 000. But this agriculture success is still fragile. Somalia is still categorized as the world’s most failed state by the Global Fund For Peace. Hardly a week goes without a suicide bomber rummaging through a crowd, hotel, cafe or airport in the capital Mogadishu.

Rival warlords and outright criminal gangs still wrestle farmers to seize lucrative plots of banana fields. Gunshots and grenades still permeate the country and farmers sometimes hide for weeks. “I still till the land with a gun to protect my crop,” explains Farak. “A good harvest can endanger your life. Militias still seize our crops to earn hard currency.” In such fights, irrigation equipment is often burnt or looted for resale. Transport links to move grain and fruits from farms to ports are still broken after years of neglect. “We have to employ expensive security guards who demand 30,000 Shillings to protect a van of bananas for every 100 kilometers,” revealed Said Warra a research scientist for the Somali Crop Evaluation Forum a government agency that certifies grain for export. Militias squeezed by the African Union funded AMISOM peacekeeping force still take revenge by seizing lucrative banana export routes from farmers.

The whole of Somalia, after a ravishing civil war, understandably does not have even one agriculture research college. Indiscriminate shelling and airstrikes from US drones and neighboring armies who pursue jihad groups sometimes kill innocent farmers. The outside world in 2015 still makes life increasingly hard for honest Somali farmers like Farak. Important Somali money transfer unions in Kenya and Europe are being shut down over fears that money laundered by terrorists move through these channels. Many Somalis with families in the diaspora depend on these money transfer services to purchase everyday necessities. “My 28 year old son works in Frankfurt Germany. He can’t wire €300 to me every month for lack of channels. I need the funds to buy pesticides for my banana crop.” Drought still threatens Somalia every year.

Much of this 246,200 square meter country is a mountainous desert so its citizens crowd together in a few fertile areas. “Our biggest headache is the local market. It’s stifling too small to sell our crops and livestock. Many mangoes rot,” complains Mir Daham, an economist with the Somali Central Bank. Even in the face of obstacles farms continue to flourish in Somalia. “Crops, fish, cattle exports can be the big the break that’ll secure peace in this country. If more income flows into people’s pockets less people will be attracted to guns,” sums up Aned Wismail a secretary in the Somali agriculture ministry. GlobalSouthDevelopment