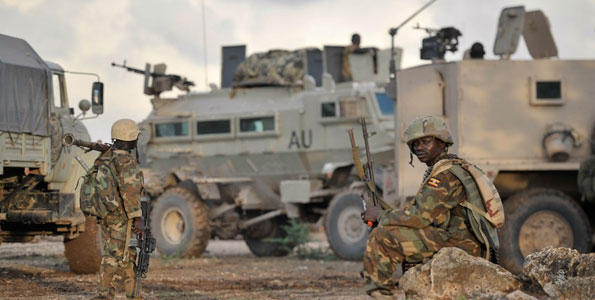 At present, Amisom “alone cannot defeat al-Shabaab,” states the analysis published on Friday by a Mogadishu-based think tank. And there is little short-term prospect of the national army and police developing into a “cohesive, legitimate and inclusive set of Somali security forces,” adds the report co-authored by Paul Williams, a US professor with expertise on Somalia, and Abdirashid Hashi, director of the Heritage Institute for Policy Studies.

It identifies political in-fighting among the various Somali factions as the main factor blocking movement toward providing Amisom with a capable partner. The political stalemate also prevents realisation of the ultimate goal of transitioning security operations in Somalia from military-led to police-led, the study says.

Despite the AU mission’s breakthrough in pushing Shabaab’s main units out of Mogadishu, the militants control much of the countryside in southern Somalia and retain the capacity to carry out large-scale and deadly operations, the authors note. They point to Shabaab’s bloody attacks on three Amisom bases in recent months, along with the carnage it has inflicted on civilians inside Kenya.

Amisom is severely handicapped by a lack of military resources that would potentially equip it to decimate Shabaab, the study says.

Amisom’s effectiveness is further hampered by the suspicions with which it is viewed by many Somalis, states the report, titled Exit Strategies for the AU Mission in Somalia.

The contingents from Kenya and Ethiopia are particularly seen in that way because the governments of those neighbouring states “have repeatedly pursued counter-productive policies in Somalia that sought to retain their influence over local and national dynamics,” the authors say.

Kenya is further thought to be operating in accordance with ulterior motives due to allegations of KDF involvement in illicit charcoal and sugar exports from Somalia, the proceeds from which are said to benefit Shabaab indirectly, the authors observe.

Amisom’s standing is additionally undermined by its documented killings of Somali civilians and the sexual exploitation carried out by some of its personnel, the analysis states.

The multinational force deployed in Somalia could also suffer in the coming months from an erosion of morale, adds the report.

Soldiers could soon see their pay reduced, the report warns.

The European Union has said it would, as of last month, implement a 20 per cent cut in the funding it provides for Amisom members’ allowances. Rank-and-file personnel currently receive monthly payments of about $828 after their respective national governments have deducted roughly $200 from the per capita sums the EU channels through the African Union.

The AU mission in Somalia costs international donors around $900 million a year, prompting the study’s authors to speculate briefly as to whether Amisom can remain financially sustainable over the long term. They note, too, that some critics have charged that Amisom troop-contributing countries may regard the operation in Somalia as a money-making enterprise and thus have little incentive to head for the exit.

But the military undertaking has clearly involved enormous sacrifices on the part of the countries that have assigned personnel to Amisom, Mr Hashi and Prof Williams acknowledge.

They note that neither Amisom nor national authorities divulge casualty figures, but Prof Williams, an international affairs professor at George Washington University, estimated in an earlier study that the war against Shabaab has cost the lives of over 1,000 African soldiers.

The AU mission in Somalia ranks, the new report says, as “probably the most deadly peace operation undertaken in the modern era.”