Home Business Somalia: Who is Funding the New Religious War in Mogadishu? 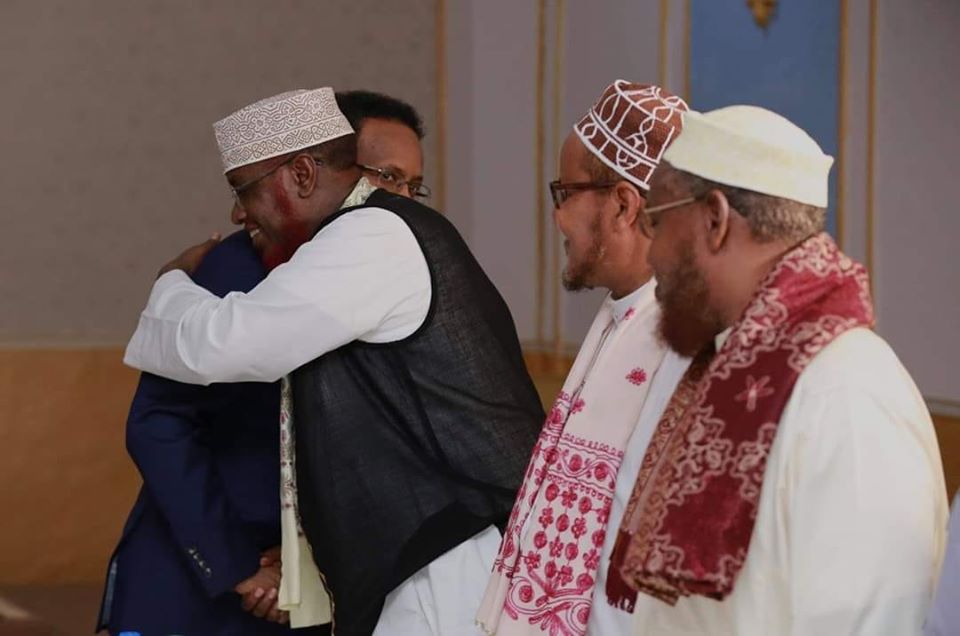 The new game in Mogadishu, who is funding back door religious-diplomatic skirmishes and mass media war. They all  used Islam as a Weapon of War in Somalia.  The Sufi clerics suddenly became miliates of war in Mogadishu, their shrines were being destroyed by Al-Ittihad and their affiliates in 1990s, led by Sheikh Hassan dahir Aways, Sheikh Umal and their friends. The Sufi scholars are part of a broader moderate Islamist movement that Western powers are counting on to repel Somalia’s increasingly powerful extremists in Southern Somalia.
Sheikh Hassan Dahir Awways for example,  was a prominent member of the top-secret team of “terror hitmen” sent by Wahabi agents in Saudi Arabia, who used fraudulent religious reports, rigged appointments, payoffs, extortion, hit and run skirmishes and murder to create the regional clan rulers in southern Somalia after the fall of Siad Barre in 1991. After a long internal struggle between his guilt and the fear of Al-Shabaab leader in Merkka, he fled to Galmudug.

The role of the current Somali religious scholarship simply cannot be ignored, because it is they, the Somali  religious leaders, who will be central to swaying the opinions of ordinary Somalis that might still harbor sympathy for Al-Shabaab under the misguided belief that the group (Al-Shabaab terror) is a defender of Islam against secular Somali government forces, both Federal and FMS.

Head to Head:  The real question is why, the promminant so-called religious political leaders in Southern Somalia are  outspoken and  waging a media war in Mogadishu, such as:

The major question is should the UAE get out of Somali politics or Qatar or saudi Arabia?

But something deeper changed for the good in Somalia. Ordinary Somalis stood up for their traditional values of respect, dignity and coexistence.The traditional old clerical class of true Islamic scholars is on their side. And they are fighting back to their bases. They are reclaiming Islam from the Wahhabi extremists and taking their message back to their communities — not only in the areas of central Somaliland frequented by expats and foreign consultants but in Puntland as well as their villages, towns and mosques across the northern and western Somali zones.

For more than a three decades, Western powers have sent their militaries to fight the product of those religious Wahhabi groups in Somalia “Al-Shabaab” and solve the plight of Somali people. But it is clear that western-soldiers cannot create a civil society. Good governance, peace and nation-building go hand-in-hand with a genuine Somali leadership and stable central government. Without young Somalis having an inclusive and collective cultural context or access to schooling, job prospects and resources with which to marry and build their own life, it becomes easier for society to break down and join those so-called Islamic leaders and those on the fringes to become easy pickings for radicalization, such as Al-Shabaab compigne to recuroot young foot soldiers in Southern Somalia, the next three months (December 2019-March 2020).

The Somali religious leadership is, after all, a crucial battleground in the efforts to counter the spread and influence of extremist groups like the Al-Ittihad, Al-Shabaab and Ictisam as well as Al-Islah see and wait tactics. And the Al-Shabaab knows it that  the new media war between religious groups will support their recruitments in southern Somalia as well as Puntland: the Al-shabaab terror group denounced the current federal Somali government (FGS)  leadership as an “anti-Islamic Western agents.”

According to the SIRAD institute briefings, and the Geeska Afrika Online reporter, they use Islam and campaign of Islam Ethiopia, Kenya, Djibouti and Eritrea as a weapon of war, to maintain their Wahhabi doctrine and its membership support. Western powers with their  technical assistance and the FGS military tactics have failed to wrest it from their grasp; because their back bone elements are inside FGS/FMS Institutions and business communities.

Photo: Saudi Arabia, Qatar & UAE were responsible for funding much of the recent religious development in Somalia.

The HAN & Geeska Afrika Online (1985-2019) Ideas hosts the IGAD’s leading voices, providing commentary on events in news, society, and culture. We welcome outside contributions. Opinions expressed do not necessarily reflect the views of the Geeska Afrika Online  editors. news@geeskaafrika.com