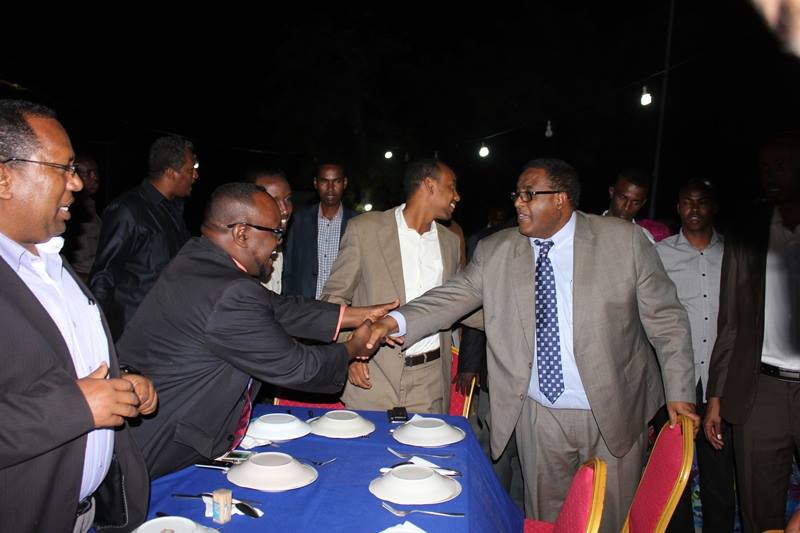 Mogadishu (HAN) February 12, 2015 – Public Diplomacy and Regional political news. An International  joint statement released by the United Nations, the African Union, the European Union, IGAD, the UK and the US welcomed Parliament’s approval, and reiterated their call for Somalia’s leaders and institutions to work together to accelerate delivery of the milestones of the Federal Government’s ‘Vision 2016′. The diplomatic statement said, together with the New Deal Compact for Somalia, remains the guiding framework for engagement.  The diplomatic statement added that it was important to preserve the Somalia unity and stability of the Federal Government of Somalia.

The US governments began strengthening ties with Somalia after civil society activist Hassan Sheikh Mohamud was elected president in September 2012.

The US State department under-secretary of state for political affairs acknowledged there was a hard struggle ahead and challenged Somalis to discard age-old clan rivalries and focus on building a united national government. “None of us can make that choice for Somalis. But Somalis should know, if they choose to continue to come together, they will have enthusiastic and substantial international support.”
British foreign policy: where the UK stands on Security, Unity and to face the current Socio-economic challenges. According to Ambassador Neil Wigan;
The start of the year is always a time to reflect on past achievements. Much progress was made in 2014 as Somalia continued on the path to stability. This path was never going to be easy – rebuilding a country that has suffered so much will take the continued efforts of all Somalis. But much has been achieved. The sight of busy streets in Mogadishu, increased trade through Somali ports and increasing security in the regions gives a glimpse of what a stable and prosperous Somalia could look like. Witnessing the re-emergence of this proud country from the ashes of conflict has been a great honour. The UK stands with you to support these efforts.

As we work together in 2015, there are many challenges to overcome to ensure the fragile gains are made permanent and irreversible. There are still too many children who suffer from malnutrition. Those who use violence are still able to undermine what has been achieved. Respect for human rights does not yet underpin all Somali institutions. I am optimistic that these challenges can be overcome. In my time leading British support for Somalia, I have repeatedly seen the ingenuity and perseverance of the Somali people. With nearly two-thirds of the population under 25, business minded and with a gift for communication, the modern networked world is perfect for Somalis to make their mark. This is shown by the success of the Somali Diaspora. Absent conflict, this country will flourish.

The appointment of the new Somali Cabinet comes at a critical time as we turn to face these challenges. We will work with the Somali government in their efforts to provide security, stability and services that are essential for people to secure jobs, to start new businesses and to provide for their families. I am glad that the UK will play a supporting role in Somalia’s future. The links between our two countries remains strong, with a vibrant Somali Diaspora in the UK making a positive contribution in many different fields. It was a proud moment when Her Majesty the Queen honoured Mohammed Farah, formerly a Somali refugee, for winning 2 Olympic gold medals at the London Games.

Alongside sporting excellence, Somalis have excelled in business, media and politics. The last few years have now seen many talented individuals return to Somalia in order to help with reconstruction efforts – a sign of the growing belief that Somalia is on the road to stability. The UK will continue to lead international support for Somalia to ensure the gains made become irreversible in this crucial year. As our Prime Minister has said; “now it is time to fulfil the hope for the people of Somalia. That is what they have been living and waiting for, and we must not let them down.” The road to peace and stability is never an easy one. But Somalia is on its way. Now is the time to turn hope into reality.

Last Year: Wendy Sherman, the American under-secretary of state for political affairs, said Somalia had become “a synonym for chaos” but there were now hopeful signs of improvement in security and the economy.

“As a reflection both of our deepening relationship with the country and of our faith that better times are ahead, the president will propose the first US ambassador to Somalia in more than two decades,” she told the US Institute of Peace thinktank in Washington.
Photo: Ambassador to Somalia Neil Wiggan in Villa Somalia, Mogadishu