Home Somalia Somalia: What Role Should the U.S. Play in Somalia? 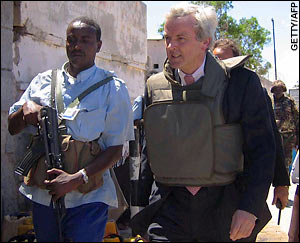 Discussants: Terrence Lyons, Associate Professor of Conflict Resolution at the Institute for Conflict Analysis and Resolution, George Mason University, and Sadia Ali Aden
Somalia’s last stable central government fell in 1991. In the sixteen years since, anarchy has reigned in the nation at the tip of Africa’s Horn. Warlords became the primary power brokers in the security vacuum until 2006, when a fundamentalist group called the Union of Islamic Courts (UIC) ascended and threatened to topple Somalia’s feeble Transitional Federal Government (TFG).

Ethiopia intervened, routing the UIC and giving muscle to Somalia’s weak national government. The United States, fearing the failed state would become a haven for terrorists, launched air strikes at suspected al-Qaeda operatives as they fled the Ethiopian offensive. Ethiopia’s troops remain in Somalia, where a hostile population wants them out but the fragile security situation prevents their withdrawal.

Terrence Lyons is an associate professor of conflict resolution at the Institute for Conflict Analysis and Resolution and interim director of the Center for Global Studies at George Mason University. Sadia Ali Aden is president and co-founder of the Somali Diaspora Network.

This debate is suffering from a severe lack of accurate information from the region; much of what does reach the US has been refracted through the distorting prisms of international media reporting from Nairobi or input from Somali opposition sources. Many Somali and Ethiopian web sites can be classified, as one Somali commentator has put it, as “tabloids of tribal malevolence”; one of the more balanced is www.geeskaafrika.com; alternative views can be found on IGAD zone sites such as www.geeskaafrika.com where two of my articles ‘PINR and the Realities of Somali Politics’; and ‘Ethiopia in Somalia, Perceptions, Comments and Realities’ (December 2006) are still accessible.

The debate demonstrates a failure to understand either the regional concerns or the reality in Mogadishu and in Somalia. This Washington perspective essentially ignores Somali clan politics. It underestimates the levels of support for the TFG and overestimates the level of opposition. It is only the Hawiye, and indeed only a fraction of the Hawiye, that is opposed to the TFG. It exaggerated the level of support for the Islamic Courts in its post-June 2006 extremist configuration, and still does; to insist on TFG power-sharing with the ICU without qualification merely demonstrates ignorance. It appears disinterested in the level of Eritrean involvement in Somalia.

These differences are important. They lead to the sidelining of local and regional political realities which must be understood if the US is going to counter extremism and terrorism, an aim shared by most Somalis as well as regional powers, or achieve regional political stability.

Washington must base its strategies on factual reality. One such fact, ignored by both participants in this debate, is that the situation in Mogadishu has vastly improved since the defeat of al-Shabaab in late April, ending its capacity to organize any large-scale activity. There are occasional suicide bombings (two actually), roadside mines and assassinations, but terrorist activity in Mogadishu has greatly reduced. Police now patrol the streets replacing the Somali army; all the 16 district police stations have been reopened; neighborhood watch groups set up; tens of thousands of IDPS have returned to the city; schools reopened; aid is flowing in, unchecked; there have been a series of successful discussions between TFG and Hawiye sub-clan elders.

It might also be mentioned that the TFG, and Ethiopia, do have a political strategy to allow Ethiopia to withdraw its troops (and more troops will be joining AMISOM very shortly) and provide for political stability. The basis is the charter agreed at Mbagathi which allows for a reconciliation process and an election in 2009. This is what the international community, and the US, should be supporting while avoiding any suggestion of manipulation.