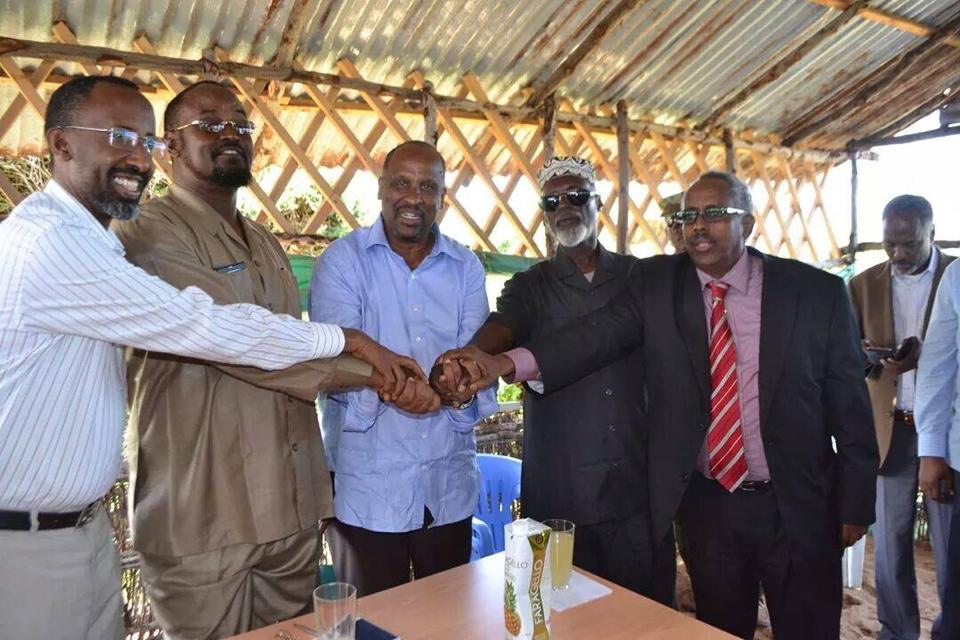 Mogadishu (HAN) September 1, 2014 – Regional defense and National security news. Weekly update on the progress of the Federal Government of Somalia over the last week. The Somali Minister discussed various issues with reporters, including Geeska Afrika Online security reporter in Mogadishu:

The Military Court’s conviction of two members of al Shabaab; Talks between the FGS and the Jubba Administration; the formation of the Technical Committee on Central State Formation; the Minister of Transport’s visit to Beledweyn; the graduation ceremony at University of Somalia; the draft law on Education; foreign training for new recruits to the military; Somali media sector development; Women Rights; and the looming drought in the country.

The Minister of Information began with the Military Court’s conviction of two members of Al-Shabaab: “The Military Court on 25th August 2014 sentenced two al Shabaab members to death for the killing of a journalist Mohamed Mohamud Tima-Adde, who worked with Universal TV, and Awil Hassan Mohamud, a security officer. Abdullahi Musse Keyse, the Spokesman of the Military Court said that the court had investigated the matter thoroughly and both men freely confessed to the killings.

Therefore, after the due process of the law, the Military Court sentenced them to death. The Federal Government has zero tolerance when it comes to terrorism related offenses and recently initiated stop and search operations which have resulted in the bringing to justice of many more of those responsible for terrorists offences. As a result of this tough stance, Mogadishu is now considerably safer than before and this is no small way because of the cooperation of public.”

Persistent joint effort by the Interim Jubba Administration, AMISOM, IGAD and the International community to resolve the protracted political and security tension in Jubbaland paid off on 30th August 2014 after former opposition leader Col. Barre Hirale and nearly a hundred of his militia surrendered to AMISOM to bring to end the nearly one year of certainty in Jubbaland.

The delegation convinced the Jubba Authority to initiate dialogue with Barre Hirale and his militia. On 27th August the Ministers of the Interior, Finance & Justice all visited Goobweyn area (30 km north of Kismayo). IGAD representatives and AMISOM were also present at Gobweyn to convince Barre Hirale to accept talks and reconciliation with Jubba Administration. Both sides agreed to begin reconciliation discussions and to attend the subsequent reconciliation conference on 21 September in Kismayo.

It was also agreed that Barre Hirale militias should integrate into Somali National Army forces in Kismayo as part of Addis Ababa Agreement. The FGS is committed to implementing the Addis Ababa Agreement and the upcoming reconciliation conference will lead the way to assist all stakeholders in the area in finding a long lasting solution with a view to ultimately forming Jubba State as part of the federalism process in Somalia.”

The Minister of Information stressed the importance of political outreach: “The Minister of Air & Land Transport, H.E. Said Jama (Qorshel) visited Beledweyne on 26th August in order to assess the rehabilitation of the airport and the offices of the Ministry of Transport in Hiran Region.

The delegation visited the airport, a centre for the issuing of driving licenses and car number plating and Lama Galay Military Camp. The Governor of Hiran Region, Abdifatah Hassan Afrah thanked the Minister for his visit to the area and noted the Minister’s visit to the airport and offices and hoped that these facilities would be fully functional soon.

Minister Qorshel praised the progress of the area and promised that the Ministry of Transport will rehabilitate the airport and all facilities for the ministry in order to further advance development and progress in the area. The Minister of Transport also noted that ministry staff will soon go to Mogadishu to undertake the necessary training to control the airspace, civil aviation and the management of the airport. The Minister concluded by promising that the ministry ensures that all staff can work in fully functioning offices.”

The Minister of Information highlighted the importance of Education: “The Acting President & Speaker of the Parliament, H.E. Mohamed Sheikh Osman (Jawaari) on 27th August 2014 attended the graduation ceremony at the University of Somalia.

Over 574 students graduated from the faculties of Medicine, Education, Social Science, Business, Management, Engineering, and Computer Science from the University of Somalia, one of a number of private universities in Mogadishu. Attendees at the ceremony included ministers, the Medical Association Board, intellectuals, the management of the university, students and parents.

The Minister of Higher Education, H.E. Duale Adan Mohamed stated the importance of these graduates finding suitable jobs within society. The Acting President Jawaari appealed to all recent graduates of universities to support the rebuilding of the nation, while sympathizing with the difficulties of the period during which they have studied and congratulating them on their achievement in spite of those challenges.”

The Minister of Information spoke on the draft legislation on Education: “The Council of Ministers on 28th August 2014 unanimously approved the Education bill presented by the Minister of Education. The Education Bill will be soon forwarded to parliament for discussion and approval. This law will hugely help streamline the strategies and policies on education throughout the country. The FGS always places a high priority on education, which is the key to knowledge and prosperity.”

The Minister of Information spoke on the reform of military: “50 recent university graduates and 100 recent High School graduates travelled to Sudan on 24 August to participate in military training as part of the reform of Somali National Army (SNA). After they complete their training they will become part of the Somali military. The aim of these courses is to enhance the professionalism of SNA, which in turn would boost the reform of the security apparatus in the country.

The FGS will continue the reform of the security forces so that Somali forces can regain the trust of the people and ultimately be able to take sole responsibility of the security of the nation.” The Minister of Information spoke on Media Sector Development: “On 24th August 2014 around 30 journalists received training to develop their skills in Mogadishu.

The Secretary General of the National Union of Somali Journalists (NUSOJ), Mohamed Ibrahim (Pakistan) and representatives from Finland’s Journalists Development Institution were present throughout the 3 days of training.

This is part of the Ministry of Information’s plan to provide the necessary training to enhance the knowledge and the skills of journalists in the country. In order to develop the Somali media sector it is imperative that journalists receive on-going training to develop their skills and knowledge so that they can become professionals in their chosen field.”

The Minister of Information spoke on the importance of Women’s Rights: “The Minister of Women & Human Rights met the Deputy SRSG & Resident Coordinator of UN Agencies in Somalia on 26 August 2014 and discussed the importance of women’s rights as well as the need for cooperation between the Ministry of Women & Human Rights and UN agencies in Somalia.

Philip Lazarini and HE Khadija Mohamed Dirie agreed to hold a conference in Mogadishu to highlight the importance of women’s rights. They also agreed to work together to advance the women’s rights agenda and the need to develop partnership between the Ministry of Women & Human Rights and the relevant UN agencies.”

The Minister of Information concluded by making an urgent humanitarian appeal: “The Minister of Agriculture, H.E. Abdi Ahmed Baafo, who is the Chairperson of the Ministerial Committee on Humanitarian Needs, updated the media on 28 August and said that the committee had visited Hudur District in Bakol Region and Dolow District in Gedo Region to assess the humanitarian situation in the area.

The Humanitarian situation in both areas is appalling and both areas are in urgent need of humanitarian assistance. The committee successfully provided 300 tons of food aid to remote areas, escorted by the Somali National Army.

The Committee also thanked the President of Djibouti, H.E. Ismail Omar Gelle, who provided humanitarian assistance in Buulo Burte district in Hiiraan Region. The FGS would like to appeal to Somalis everywhere around the world as well as to international community to provide urgent humanitarian assistance to those people affected by the severe drought in Somalia.”