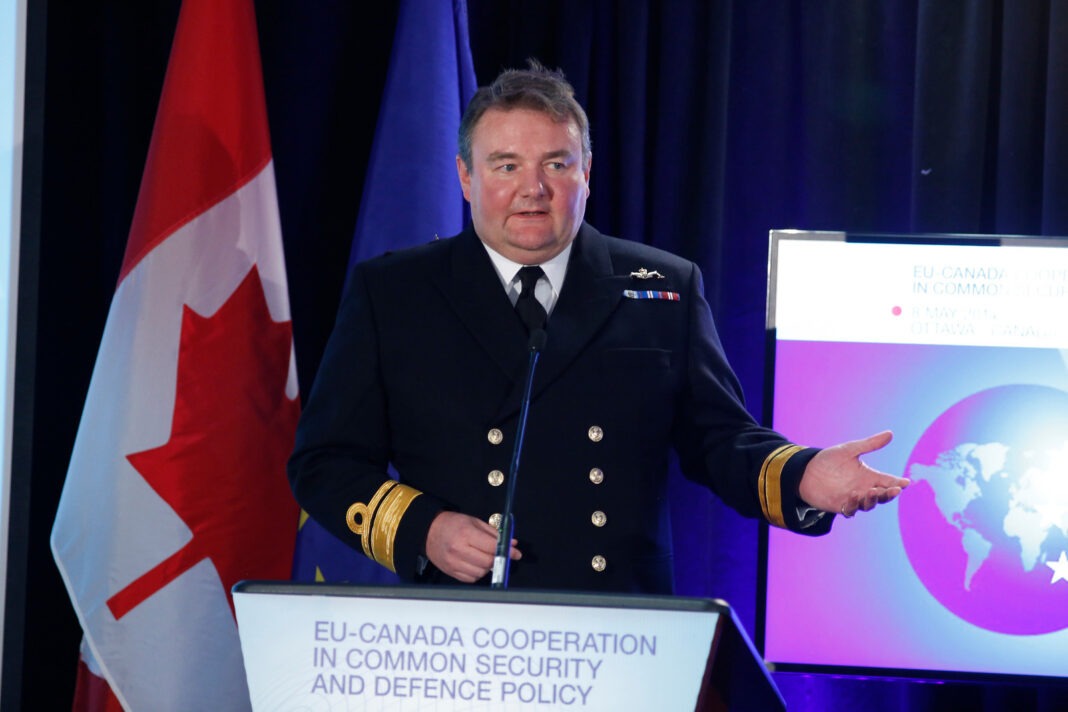 Belgium (HAN) May 10, 2014 – Press Briefing Geeska Afrika Online Managing Director, Nur Kafi, MIPIS talk to the Operation Commander of the EU Naval Force, Rear Admiral Bob Tarrant, and has issued a renewed warning that the Somali pirates are still determined to get out to sea (Both Red Sea and Indian Ocean)  and, if presented with an easy target, will attack; that could be a searies threat to the supply-lines and humanitarian operations.

Rear Admiral Bob Tarrant told Geeska Afrika Online Security Editor, “I am very concerned that seafarers and nations will lower their guard and support for counter piracy operations in the belief that the piracy threat is over,” Tarrant said in a statement. ” It is not; it is merely contained.”

Last Year, The Admiral’s similar warning comes  after EU Naval Force warship Rayo located a skiff 320 nautical miles off the Somali coast. Six men were in the boat, along with equipment commonly found among pirates. Although there was not enough evidence to prosecute the suspects, the Rayo’s command returned the men to the coast — without their skiff.

While no ship has been hijacked since the chemical tanker Smyrni was seized off the Somali coast about a year ago, nine ships have been attacked. Two vessels and 54 hostages are still being held by pirates who, once again, are issuing death threats to hostages if ransoms are not paid.

“It is clear that there is no room for complacency,” Tarrant again told Geeska Afrika Online. 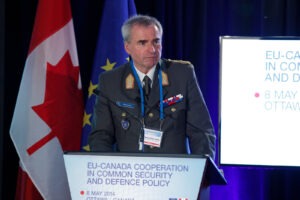 The Director General of the EU Military Staff, Lieutenant General Wolfgang WOSOLSOBE, who attended the Defense and Security Symposium also added
“EU Naval Force continues to protect vulnerable shipping against pirate attacks. Under my command the Task Force will continue to support the EU’s Comprehensive Approach by working with EUCAP Nestor and other EU initiatives in the region.”

The following opinion were requested again to re-publish, according to the voices of our readers, Geeska Afrika Online. It was an Interesting article, but I didn’t see a single mention of the piracy that’s been rampant off the coast of Nigeria.  Yes,   the case of  Somali pirates which is and are a serious problem, but piracy off of Africa’s west coast is horrific as well to mitigate and open west-Africa supply lines.

The Somali diplomat and writer Ambassador Abukar Arman, wrote 2009, Make no mistake: The proliferation of piracy in the Somali coast is a serious problem — not only for the international community but for Somalia in general, and more specifically, for the current Islamist-led government of national unity. After all, Islamic law has zero tolerance for banditry, whether sea-based or land-based.

That said: piracy in Somalia was not born out of vacuum — it was initially an act of protestation by local fishermen to the illegal hyper-fishing practiced by numerous fishing companies primarily based in Europe and Asia. The reckless greed of these “fishing mafia” has been dangerously depleting sea life in that part of the world. In due course, the local fishermen would be joined by others, including some of the profiteering elements of the Somali civil war, for reinforcement and thus creating an identity conflation.

The partnership would describe itself as the de facto Somali coast guard. It would offer the following reasons for its controversial activities: to prevent the fishing mafia from abusing the Somali sea resource, and to prevent mercenary ships from dumping toxic chemical waste in the Somali waters. Leaders of the partnership would offer interviews to the international media challenging the conventional wisdom that identified their acts as “piracy” and the monies they collect as “ransom.” This claim would not only help present a moral argument in defense of the partnership’s illegal activities, but it would enable them to score a few public relations points. However; while the grievance that they put in the center stage is real and serves a serious attention, there is practically zero evidence to indicate that these pirates are driven by altruistic objectives.

Meanwhile, the number of high-jacked ships and vessels (commercial or otherwise) and the cost of freeing them and their crews have been escalating.

Today, piracy is not only disrupting international trade, it is preventing the flow of humanitarian aid to several million Somalis on the verge of starvation and is perpetuating the very culture that kept Somalia in an abyss of anarchy. The insurance rate for a single trip in the Gulf of Aden went up from $500 last year to about $20,000 this year. And there are roughly 30,000 ships that travel through the Gulf of Aden every year and little over 100 have been victims of piracy the last 12 months. And this indeed is a serious matter.

However, the nagging query that most media seem to ignore is: at a time when massive budget cuts became survival necessity for most of the wealthy nations, how could seemingly manageable level of threat logically justify the multi-national deployment of the mightiest navies of the world to engage in a much costlier and indeed indefinite endeavor (operation water circus)? How many warships are needed in order to carry surveillance operation on Eyl and Harardheere where all the Somali pirates are based?

We are talking about two bone-dry coastal villages that no rat could find a place to hide.

These pirates are not falling off the sky, and it is not like there is a tourist industry that could give the commissioned speedboats anchored along the shores of these two villages the appearance of leisure boats.

To adequately understand the piracy situation would require context beyond the illegal activities. Albeit, in the past eight years, America and much of the world were inculcated with an ill-advised notion that context is obsolete and that the official statement is all that matters in understanding complex issues such as extremism, terrorism and indeed piracy. It goes without saying that that mindset has not only failed to reduce or irradiate any of these ills, it, in fact, exacerbated them.

With that in mind, clearly missing out of the piracy discussion is a couple of critical factors: First, the importance of the Indian Ocean as a premier strategic region in light of the ‘shifting economic balance of power from West to East’ and China’s rapidly expanding influence in Africa.

In his insightful essay, “Center Stage for the 21st Century: Power Plays in the Indian Ocean,” Robert D. Kaplan presents a compelling argument that the power that controls the Indian Ocean controls the new century. Kaplan is one of a few neoconservatives whose ideas still generate some interest; he is a National Correspondent for The Atlantic magazine and a Senior Fellow at the Center for a New American Security.

Second is what Phil Carter, Acting Assistant Secretary for African Affairs, describes in his speech “U.S. Policy in Africa in the 21st Century” at the Africa Center for Strategic Studies last February, as “the professionalization of Africa’s security sector.” And if this sounds like a thinly veiled euphemism and a page out of the last administration’s foreign policy playbook, it is.

Currently there are three possibilities being considered — reenergizing the Africa Command Center known as AFRICOM, which was rejected by all African nations asked to host; providing US Navy escort services, or simply securing lucrative deals for private security contractors such as Blackwater –however, there is only one that is readily available for hire. And under such inevitable scenario, Obama’s foreign policy would be seen as nothing but a continuation of the old bankrupt neocon scheme.

Meanwhile, like in the peak of the Cold War era, Somalia remains as an exploited pawn in a deadly chess game. And as Nick Nuttall, the spokesman for the United Nations Environment Program, recently said, “European companies and others” will keep using Somalia “as a dumping ground for a wide array of nuclear and hazardous wastes.” Nuttall confirmed the horrific allegations that “There’s uranium radioactive waste, there’s leads, there’s heavy metals like cadmium and mercury, there’s industrial wastes, and there’s hospital wastes, chemical wastes, you name it.”

For a solution to the piracy dilemma, the Obama administration should (2009) Recommendations:

5) Sign a security treaty with the Somali unity government. [This will not only mark the first time the US signs any treaty with Somalia, it will send a peace message to the rest of the Muslim world that America is indeed ready to establish formal relationship with any one on issues of mutual interest]

6) Help build a Somali navy to protect its waters

There is no military solution to this problem. The military option will only win the pirates more support and sustain the current state of lawlessness.