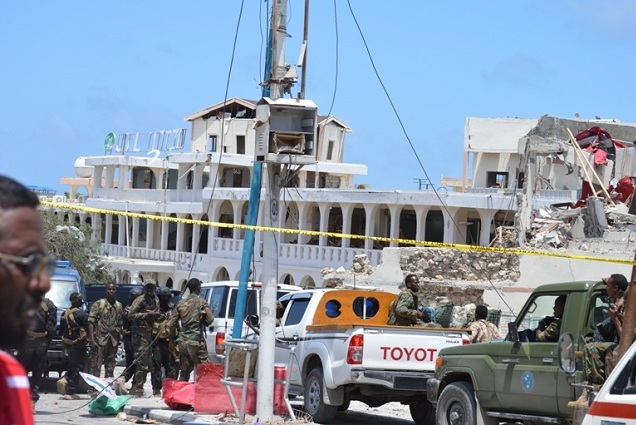 Mogadishu (HAN) August 30.2016. Public Diplomacy & Regional Security News. The Special Representative of the UN Secretary-General (SRSG Keating condemns terrorist attack at Mogadishu hotel) in Somalia,  Michael Keating strongly condemned this morning’s truck bombing of the SYL Hotel in Mogadishu that killed at least 13 people and injured over 20. Several senior government officials and members of the federal parliament were attending a meeting inside the hotel at the time of the blast, but none was among the fatalities.

Al-Shabaab claimed responsibility for the attack, which took place in the vicinity of the presidential palace and the federal parliament building.

“Violent extremists have once again bombed a hotel in the Somali capital,” said Mr. Keating. “In fact, today’s bombing marked the third such attack on the SYL Hotel since the beginning of 2015. On each previous occasion its management and staff have repaired the damage and reopened its doors for business in short order.

The SYL Hotel provides powerful evidence of the extraordinary resilience of the Somali people, who refuse to be cowed by al-Shabaab’s campaign of terror.”

Security guards halted the explosives-laden vehicle as it was approaching one of the gates at the Villa Somalia complex, thereby averting greater loss of life.

“Our thoughts and prayers are with the families of the victims who perished in today’s attack,” said the SRSG. “We wish the injured a full and speedy recovery.