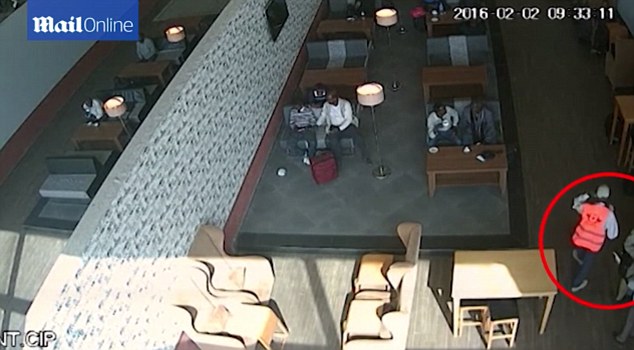 MOGADISHU (HAN) February 8, 2016 – Public Diplomacy and Regional Stability Initiatives News. This is the extraordinary CCTV footage of the suspected bomber of a Somali plane at the exact moment when he is being handed a laptop in which the explosives were concealed. The video, released by Somali intelligence officials, shows a passenger being given a laptop by two other men, one of whom is wearing a security jacket, after he passed through security.

The National Intelligence and Security Agency (NISA) believes the passenger is the suicide bomber who was blown from the Daallo Airlines jet creating a gaping hole in the fuselage and forcing the plane to make an emergency landing back at the Mogadishu airport.

It is believed the laptop-like device was the bomb that caused the explosion. The plane’s pilot said that if the explosion happened when the aircraft was at a higher altitude it could have caused the jet to crash.

“There are investigations going on and about 15 people have been arrested so far in connection with the incident,” a Somali security official who asked not to be named told AFP.

“The initial investigation results indicate that the bomb was planted in a laptop and was carried by one of the passengers.”

“A CCTV camera recorded some of the activities and the attack is believed to have been coordinated by a network of individuals, many of whom have been arrested and are being investigated,” the source added. The authorities had initially attributed the blast to sudden air decompression.

But on Saturday, following investigations by Somalia and international experts, Transport and Aviation Minister Ali Ahmed Jama blamed a bomb. “Experts have confirmed the explosion that occurred inside the Daallo Airlines [jet] was not a technical problem but was a bomb that was intended to destroy the plane and kill all passengers onboard,” he said.

The man who was sucked out of the plane and plummeted to his death was believed to be a wheel chair bound suicide bomber identified as Abdulahi Abdisalam.

Another two passengers were slightly injured. Analysis of the bomb residue suggested it contained ‘military grade explosives’, a source close to the investigation told CNN.

Analysts said the bomber may have smuggled the bomb on board in his wheelchair before moving to a different seat once on board, a Western diplomat briefed on the investigation told the Wall Street Journal.

Serbian pilot Vladimir Vodopivec told a Serbian newspaper he immediately suspected a bomb, adding he was able to make a forced landing after the explosion did not damage his navigation system. Daallo Airlines operates out of Djibouti, flying to destinations in the Horn of Africa and the Gulf.